Americans All. Foreign-Born Soldiers in World War I by Nancy G Ford 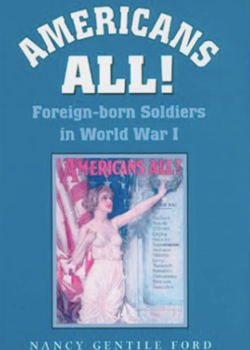 His is a well-crafted history of the American Expeditionary Force (AEF) which sets out to establish, and successfully so, that the US Army allied itself with progressive social reformers in integrating foreign-born and nonEnglish speaking draftees into an effective multi-ethnic fighting force.

The American armed forces of the period (1917-1919) consisted of some 4.7 million men and women. One in five was born outside America. Twenty-five per cent were functionally illiterate; many spoke little or no English, and more than ten million went to fight in Europe. Recognising early on that it must cope proactively with issues raised by drafting many thousands of recent immigrants, the War department quickly devised new, innovative training programmes. The Army by necessity co-opted progressive civilian social service leaders such as Raymond Fosdick, and organisations as diverse as the YMCA, Knights of Columbus, the Jewish Welfare Board and the Playground and Recreation Association of America to set up libraries, recreational facilities, English language and hygiene classes for foreign-born soldiers. The Army also went out of its way to identify bi-lingual and poly-lingual soldiers for promotion and commissioning.

In many units (including in Alvin York's 82nd 'All American' Division) platoons and even companies were formed entirely of speakers of Polish, Italian, Russian, Spanish, German or another language. Diverse religious observances were not only tolerated, but also encouraged. The Army sought expeditious naturalisation of German, Austrian and Hungarian 'enemy alien' soldiers. Racial stereotyping and slurs were actively discouraged, and cultural sensitivities respected. Such were the integral parts of the so-called 'Camp Gordon Plan' named for a major recruit training facility in Georgia. In addition, the Department of State initiated negotiations with Allied governments regarding the service of their nationals in the US Armed Forces and to facilitate transfer of soldiers' pay allotments to families living overseas.

While much of this broad effort was directed by the Army's Division of Military Intelligence (MID) ForeignSpeaking Soldier Subsection (FSS), the emphasis was on education and relatively gentle 'Americanisation', not counter-espionage. Indeed, the Army's efforts compared favourably with the often crushingly zealous security programmes of the US Department of Justice under Attorney General A. Mitchell Palmer and the sometimes crude propaganda of George Creed's Committee on Public Information.

In this massive effort in integrating hundreds of thousands of foreign-born and first generation Americans into a unified fighting force one senses the beginnings of the American Armed Forces as the world's largest educational institution, which it has become today. General Pershing followed up in 1918 by creating the AEF University (see: Alfred E. Cornebise Soldier Scholars - Higher Education in the AEF 1917-1919, APS, 1977). This effort at assimilation also represented the last gasp of the progressive movement in America. 'Return to Normalcy', the resurrection of the Ku Klux Klan, and prohibition were ushered in with the election of Warren G. Harding in 1920. The Immigration Act of 1924 cut off the massive immigration from Europe which had helped fuel the massive industrial growth that typified America's post Civil War era from 1865 to 1914. And, the eventual integration of black Americans into the Armed Forces took another war and an executive order ending military segregation signed by Great War veteran Harry S. Truman in 1948, some thirty years after the guns fell silent on the Western Front.