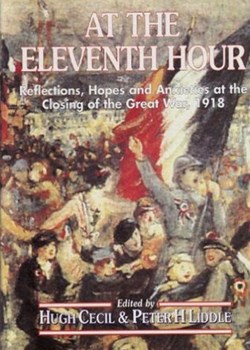 Contributions come from a wide range of historians: Bullitt Lowry on negotiating the signing of the Armistice, Heinz on the German perspective, Allain Berneden on the French. Belgium, America, Australia, New Zealand, Canada, South Africa, Japan and India are also dealt with by experts on those countries. There are pieces on eastern Europe and the fatal sequels, Bulgaria in defeat, the Turkish Empire, the Arabs, Italy and Austria-Hungary also get interesting essays. John Bourne covers the consequences of the Armistice, Hugh Cecil the literature.

The changing meaning of the Armistice is summed up by Matthew Richardson. He considers why commemoration is a particularly British and Commonwealth phenomenon and why it means so much more here than in France and America. He also considers its fluctuating social significance, charting its rise, fall, and rise again over the years. The book is worth getting for that chapter alone.

It helps us to understand the true significance of Armistice Day over nearly 100 years.