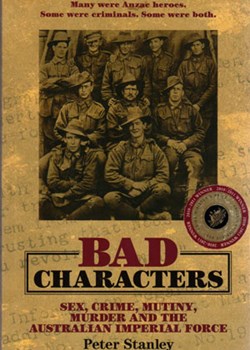 Bad Characters is a very important new book. Not only is it scholarly, but it is also highly entertaining. It looks into the indiscipline of Australian Soldiers – the AIF – in the Great War. Rather than using sweeping, unsupported generalisations, Peter Stanley (who is head of the Centre for Historical Research at the National Museum, Australia) has undertaken substantial research into specific examples of indiscipline and used dozens, if not hundreds, of cases from court martial files and soldiers' letters to support his assertions. The list of archival sources consulted (from the bibliography) is awe-inspiring.

The book pulls no punches. It is beyond doubt that the AIF had a poor disciplinary record but, despite this, the author states the case – quite rightly – for the AIF's fighting capabilities. This disciplinary problem is exemplified by the revelation that in I Anzac Corps over 250 officers were needed every month to sit for Courts Martial; this was double the required number for the average BEF Corps.

The book is arranged into sixty short chapters, and tells the AIF's story chronologically. By adopting this approach, Dr Stanley has been able to weave the arguments he makes into the context of the war, without re-telling the story of the AIF's battles, in which area we are already well served through other books; these other sources have never come close to this detailed examination of crime and "bad behaviour". Why was this indiscipline so pronounced in the AIF? Dr Stanley quotes Charles Bean (the Official Historian of the AIF) on his reflections on what made the AIF different to the British Expeditionary Force: Bean "decided that it lay in the deeper dissimilarity between conditions of English and Australian Society"; British society being more aware of "class distinction". The book does not attempt to examine this class and society theme, which (for this reviewer) is positive as it enables other, more interesting aspects of the AIF's discipline to be examined.

Subjects covered include the obvious absence, desertion and drunkenness through to robbery, murder and fraud. It includes fascinating insights into the AIF's 'recreation' in brothels – and the authorities' dilemma in working out a policy for the management of these, and the 'medical consequences' of such recreation. (In mid-1917 we are told that STD infection rate in AIF divisions was 144 per 1000; in British divisions it was 24 per 1000). Murderers detailed include Private Verney Asser who killed Cpl Joseph Durkin at Sutton Veney Camp (Asser was hanged after his (non-military) trial) and L/Cpl James Richmond who was sentenced to just four years for attempted murder after throwing a grenade into Sgt Arthur Beresford's dug out (Beresford died of his wounds).

The crime and bad behaviour that is detailed is not limited 'other ranks'. Numerous cases of officers who ended up on the wrong side of the military justice system are also examined, such as the extreme case of Lt David Howell-Price who, in 1917, faced fraud charges for passing forged cheques amounting to £67,000 (a substantial amount in today's terms).

Although the book concentrates exclusively on the AIF, there is no reason to suppose that some of the experiences related (for example the brothels and the gambling) do not have relevance to the experiences of the BEF.

An assessment is made of the failure of the Australian Government to agree to the implementation of executions, and the use of statistical evidence backs up the assertions made in this regard. Although greater use could have been made of these and other statistics, this approach would inevitably have detracted from the interesting and well-paced narrative.

Without giving away too many of the entertaining anecdotes related, highlights include details of the replacement of "He's a Jolly Good Fellow" with the alternative "He's a Bloody Old Bastard" sung by Gunner officers to a visiting General and the "Counting Out" of unpopular officers. (It seems that a frequently-used technique was the commencement of a count, taken up amongst a group of soldiers, starting at "One" and ending at "Ten" at which point the chorus of "...Out you Tommy Woodbine Bastard!" would ring out.)

Some of the stories give pointers for further research. For example it seems that the 2/1st South Midland Field Ambulance were the specialist unit for Self Inflicted Wound cases.

As Peter Stanley says "...Australians idolise the AIF....This admiration, though sincere, has tended to emphasise the positive, leading to a distorted, superficial understanding. It is time to see the AIF acknowledged in the round, appreciating that its unique character owed much to the mix of 'bad characters' and good soldiers."

Bad Characters was the joint winner of the 2010–2011 Prime Minister's Prize for Australian History. It is very highly recommended for anyone interested in learning more about this fascinating and under-written aspect of the war.