Battlebags-British Airship of the First World War by CES Mowthorpe 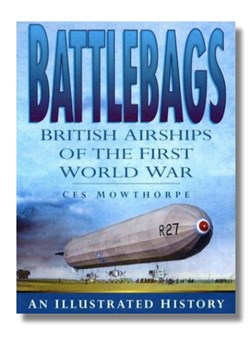 [This review first appeared in the September 1996 edition of Stand To! No.47]

Most people associate lighter than air machines of the First World War primarily with the German Zeppelins. Yet, as this book demonstrates, the Royal Naval Air Service also operated at least 226 airships, and in 1918 Vickers was second only to the Zeppelin company as a builder of rigid airships.

One of the British company’s design teams was Barnes Wallis, who was to come to prominence twenty-five years later as the designer of the ‘bouncing bomb’ of Dambusters fame.

The writing of this book was clearly a labour of love. The authose has been an aviation enthusiast since the age of sixteen, and this book is the result of years of painstaking research.

Much of the book consists of potted career histories of the various airships. 'SS-32 - Maurice Farman car. Built at Barrow. Trials 10 April 1916. To Folkestone 10 October 1916, replaced' - this is

a not-untypical example of the entries, which are supported by numerous photographs and some impressive constructional drawings. Obviously, a work of this type will appeal largely to specialists, and I suspect that most people will find the more general introductory material to be the most valuable part of the book. Nevertheless Mr. Mowthorpe has produced a valuable work of reference which is unlikely to be superseded.