Belgium in the Great War by Jean-Michel Veranneman 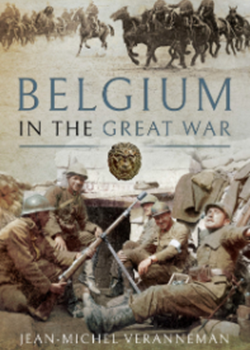 Belgium in the Great War

As the ostensible reason for the British Empire going to war, and the site of perhaps its most ‘holy ground’, Belgium is a subject about which we should know more. It was in this vein that I opened this book, a worthy attempt to satisfy that need. Sadly, however, it is a real curate’s egg. The author (who died before publication) was a Belgian professional diplomat with the UN, NATO and the EU. Sadly, his book often reads like a somewhat pedantic, and somewhat pedestrian, official report. As there is no translator credited, I assume he wrote in English. While this leads to some delicious usage (‘Prince Rupprecht of Bavaria, brother– in–law of the new Queen and wife of Albert I …’ being a case in point) it does not make an easy read. The creation of Belgium is covered in depth (although, sadly, the author finds no space for de Gaulle’s dictum that ‘Belgium was a joke played on the French by the British’) as are Leopold I’s depredations in central Africa (the defence being that it was Leopold’s personal fiefdom so not the fault of Belgium). Pre–war Belgian politics were a fascinating area which the author covers well. However, once the war starts, his style breaks out again. Coverage of the executions carried out by the invaders (the author gives 7,000 as an approximate number for those murdered) is given in dispassionate style and makes it difficult for the reader to get a feeling for the true horror of the time.

The ‘rape of Louvain’ (now Leuven) and the closure of all Belgian universities received due coverage.

One advantage of the author’s style, however, is that facts and figures abound. I was amazed at the number of Belgian Army desertions. Although generally never more than 150,000 strong, the army suffered nearly 7,000 desertions in 1916 and 1917. Thanks to their King’s actions to preserve this very small army, however, Belgian losses were proportionately seven times lower than those of their Allies, and until the Advance to Victory, no offensive action was taken.

A fascinating sidebar to Belgium’s war is the relationship between Walloon (French– speaking) and Fleming (Dutch–speaking) Belgians.

Despite the author’s defence of the status quo, he has to agree that Flemish losses were proportionately higher (3 to 9 per cent). Flemings comprised some 60 per cent of the infantry, whereas proportions were reversed in the support arms and the officer corps was overwhelmingly French speaking. His defence of this tends to seem over–egged (if readers will excuse the extension of the metaphor in the heading above!). Desertions, too, were heavily weighted to the Dutch–speakers. German efforts to drive a greater wedge into this already fractious relationship are covered, and it must be said that the actions of French– speaking officers and administrators seem to have helped. Other theatres (East Africa, for example) are covered, as are deportations (55,000 Belgians were deported, with 47,000 also forced to work at the front) as are the war’s effects on Belgian industry. The figures for the latter are truly eye– watering: from 2.5 million tons of pig iron in 1913 to 28 tons in 1915 and a 90 per cent drop in steel production between 1913 and 1919. Finally, we come to Versailles, where Belgium, it must be said, was rather side–lined. However, when one considers the massive amounts of blood and treasure shed by France and Britain, compared with Belgium’s losses of 53,000 men, one can understand why this came about. An odd book, then. I am glad I read it, but not one I can recommend at full cover price, although on offer or in a sale, certainly. The authorship is somewhat lightly old–fashioned, the English clunky. Equally an apparent lack of engagement with the subject makes me hesitate to endorse it too much. A word to the publishers: a decent editor and proof–reader might have made a difference! Steven Broomfield

This book review first appear in Stand To! 117 February 2020