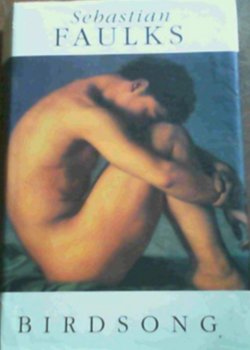 Works of fiction are not often referred to in Stand To !, but occasionally a work appears of sufficient character to merit a review. Birdsong is one of these. It appeared in the Sunday Times best sellers list for many weeks during 1994.

Briefly, the story opens in Amiens in 1910, when Stephen Wraysford, the principal character, takes up a position in the textile industry there. He lodges with Rene Azaire, owner of two textile factories, Rene's second wife Isabella and the two children from his first marriage. Amiens is clue enough to indicate the future content of the novel, and this is confirmed when Stephen accompanies the Azaire family on a fishing trip to the River Ancre, somewhere in the area between Beaumont Hamel and Thiepval in the summer of 1910. The brilliant evocation of pre-war France is a forerunner of much superb writing to come.

Stephen soon embarks upon a passionate relationship with Isabella, resulting in their leaving Amiens and taking up residence in St. Remy-de-Provence, where Isabella becomes pregnant. Guilt ultimately causes her to leave Stephen, and he returns to England. The story now moves forward to France in 1916, and the Western Front.

Commissioned from the ranks of his territorial battalion, Stephen finds himself, as a young lieutenant, with tunnellers on the Franco-Belgian border; here the reader is introduced, briefly but dramatically, to the horrors of trench warfare and to the terrifying business of mining and fighting underground. Though badly wounded, our hero returns to the Front in the Albert area, and takes part in the attack on 1 July. He is wounded again, but comments that it is 'not even a blighty one after all that'. Here, Faulkes' narrative is of the highest quality. The description of the fighting in the area of Hawthorn Ridge, Beaumont Hamel and Thiepval is superlative. It is neither sentimental nor heroic, just so horrifyingly vivid that one finds oneself in the very midst of the carnage of that terrible day. It can be safely said that there are few examples in fiction that manage to recreate so graphically the experiences of the infantryman on the Somme.

The story next leaps over sixty-two years to England in 1978, and to Elizabeth Benson, a businesswoman in the fashion trade. On the 60th anniversary of the Armistice, she is moved to explore her grandfather's life and what he did in the Great War. Western Front Association readers will be familiar with the many lines of enquiry that she follows, and she is helped by several volumes of her grandfather's diary. A second 'quantum' leap returns the reader to 1917 and the successful attack on the Messines Ridge; Passchendaele and its horrors are described, before Stephen's career is followed to the end of the war.

The climax to the novel details another underground skirmish after which Stephen and one of the miners are entombed for several days in one of the mine chambers. The time span and his eventual escape stretch the imagination to a point almost beyond belief, but the detail is, apparently, based upon a well-documented event.

Of course, Elizabeth Benson does find out all about her grandfather's life, but the details are for the reader to discover. A compelling book, Birdsong is full of passion and pathos, of tenderness and brutality, of love and hatred. It is neither anti-war nor heroic, but is an exceptionally well-written narrative, a fitting tribute to all who served in the Great War. It should grace the bookshelves of all WFA members. Do read it! You will not regret doing so.

[This review first appeared in the September 1995 edition of Stand To! This is the journal of The Western Front Association and is available to all to all members, including the entire archive via their Member Login].