Britain’s Quest for Oil, The First World War and the Peace Conferences 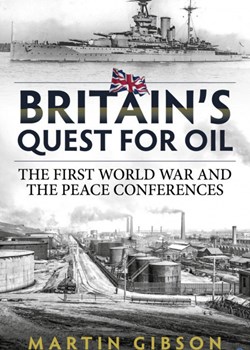 Britain’s Quest for Oil, charts the awakening and development of Britain’s military, diplomatic and commercial imperatives to secure oil supplies. In this reviewer’s experience, little of this complex story has been told to date, at least for the general reader.

The industrial nature of the Great War was obvious to statesmen and military leaders from the start. The major challenge was always to acknowledge every way of maximizing and applying their strength in every arena of combat. Given the dominant role of coal as the source of industrial power at the start of the twentieth century, the rapid growth of oil as a rival or alternative was under recognised.  Although there were certain activities where oil was essential, notably the conversion from coal to oil burning by most ships in the Royal Navy (although not the German High Fleet), in the air, for road transport and chemical production.

The USA was already the world’s leading producer. The Ottoman Empire and Russia had oil fields with their national boundaries; Britain, France and the Central Powers did not. Oil supplies were recognised as an important contributor to victory and uncertainty about the reliability of supplies from the USA led to France and Britain looking elsewhere - notably at the Mosul Province of northern Mesopotamia (modern Iraq.)

There was much debate about whether the best policy was for the government to work through the oil companies or take direct control, usually military, of areas which contained the oil fields. These issues continued after the war and coloured British attitudes to their League of Nations Mandate in the Middle East. Much of what was decided about the collapsed Ottoman Empire at the conferences of Versailles, Sevres and Lausanne continues to beset the area to this day.

Britain’s Quest for Oil is one of the Wolverhampton Military Studies series (edited by Stephen Badsey) which promotes academic rigour alongside readability. Author, Martin Gibson, had experience in the oil industry before turning to historical research and writing. The book splits evenly between the war years and the period from 1918 to 1923. It contains both glossaries and an unusually well-arranged bibliography. Sadly, the index is disappointingly slender.

For readers whose primary interests are the strategic and diplomatic waging of the War, Martin Gibson has provided a fresh and important perspective. 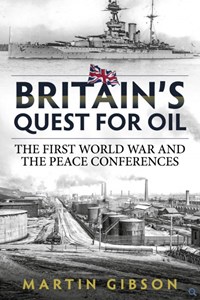 Britain’s Quest for Oil, The First World War and the Peace Conferences by Martin Gibson

Find out more from the publisher > HELION