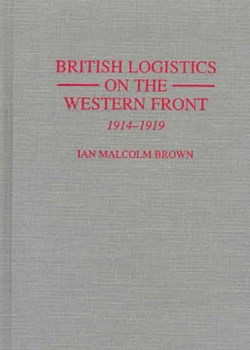 Dr. Brown gives us what we seldom see, but need to understand: the history of how the greatest army in Great Britain's history was supplied. This is not a story of quick and complete success in overcoming inertia and inexperience. Rather it is a story of trial and error and of a very steep learning curve. It is also a story of flexibility, intellectual and professional agility of the sort that enabled England's top soldiers (Field Marshal Sir Douglas Haig and Imperial Chief of General Staff Sir William Robertson among them) to adapt to changing conditions and to call upon civilians were military expertise was lacking. But, this is eventually a tale of defeat: a defeat that came in 1918 following the Armistice when two armies of the British Expeditionary Force took a month to move 80 miles to take up occupation positions along the Rhine and in Germany.

In fact, as the author tells it, the 'muddle through' tradition of the British Army — based as it was on solid post- Boer War reforms — served quite well in the opening months of conflict. But, as the BEF grew exponentially from five divisions in August 1914 to just under a million men in December 1915, things began to fall apart. Ad hoc solutions sustained this growing force through the shell crisis of 1915, but the clumsy supply system of overlapping fiefdoms finally broke down under the strain of the Somme Offensive. For once Haig. 'Wully' Robertson and Prime Minister Lloyd George agreed on the way forward. They hired British railway executive Sir Eric Geddes, gave him the honorary rank of Major General and placed him in charge of all BEF's transport. Geddes, who later became First Lord of the Admiralty,rationalised and streamlined the BEF transportation system by breaking it into five parts: docks, railways, canals, light railways and roads. He also hired other civilian transport specialists to organise ports and other key sectors. But, given the chronic shortage of motor vehicles and draft animals, rail — and particularly broad-gauge rail — remained the backbone of the system. This system served the BEF well through the retreats of the Ludendorff 'Peace Offensives' of spring 1918 and the return to mobile warfare that marked the final seven months of the war. The system only broke down after the Armistice when, faced with political pressures to demobilise rapidly and return railways and ports to civilian control, the British Army found itself nearly paralysed as it attempted to advance across the battle zone and assume occupation duties in eastern Belgium and Western Germany. But, by then the war was won. In all, Brown's book reminds us why it is that amateurs argue tactics while professionals argue logistics.

[This review first appeared in the journal of The Western Front Association Stand To! Issue 57 January. This and other copies of Stand To! are available to read online to members by signing in using their Member Login] 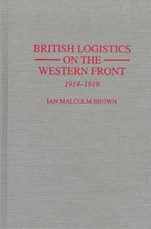