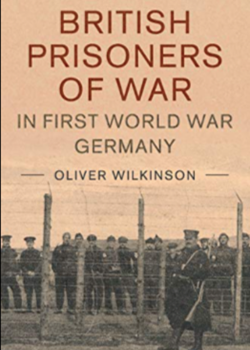 The numbers of prisoners of war, on all sides, proved to be a major aspect of twentieth century warfare. Not least over 185,000 British Empire and Dominion personnel were captured. British Prisoners of the War is part of CUP’s Studies in the Social and Cultural History of Modern Warfare series (carrying the usual eye–watering academic price tag; even the Kindle edition is more than £60.00!). Dr Wilkinson is a postdoctoral research fellow at the University of Wolverhampton who specialises in twentieth century conflict, focussing on the history of war captivity and prisoner of war experiences, having previously contributed articles on the subject in other publications. Although I became despondent reading the introduction – anticipating that the text may be impenetrable to the ordinary reader – I need not have worried. This is both a meticulously researched and well–written work drawing on an impressive range of sources, official and private.

The book comprises three main sections, capture and survival, resistance and, for the survivors, release and repatriation. The officer/ other rank divide was just as strictly adhered to in captivity as it was prior to capture. Officers did not work, other ranks worked or became their servants – senior officers had one each, and their own rooms, while the others had to share.

Prisoners taken early in the war were frequently faced with building their own camps. Camp locations were dictated by political expediency of the geography of a country at war. The sheer numbers presented logistical problems of a scale far larger than in the days of pre–industrial warfare. Dr Wilkinson explains how camps were located, their construction and the space that was required for each rank was laid down in the Hague Conventions. Like other belligerents, the Germans separated the officers from the other ranks in Offiziersgefangenenlager, Kriegsgefangenenlager for other ranks and Arbeitslager (other ranks work camps).

On a personal note, one of my father’s cousins (2/Sherwood Foresters) was captured in October 1914. From photographs, he appears to have spent most of the war working on a farm. Consequently, it proved comforting to read that Lance Corporal Joe Armstrong – captured similarly early and employed on a farm – described being ‘fed like a fighting cock’! Recommended.