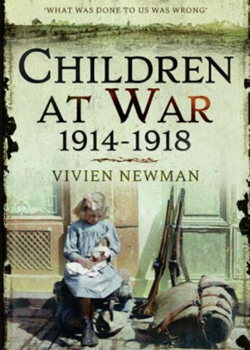 This anthology of children’s remembrance and later writing on the Great War is wider ranging than the last I reviewed in Stand To! some two years ago. This covers all the warring nations, although not surprisingly, most are from the allied side. Dr Newman offers examples of suffering and courage up to the age of 18, in chapters starting at the nursery and gradually reaching those serving during the war.

I found the first chapter somewhat disappointing; a gallop through various nursery and schoolroom stories. Subsequently, it becomes more structured and really got going in chapter two covering the efforts of the Boy Scouts and Girl Guides with the G.G. giving the reputation and capabilities of the fair sex a boost as they proved to be far better at many of the tasks allotted to them; especially those working for MI5!

Girls proved more conscientious and trustworthy and were eventually trusted to convey Top Secret messages verbally. The final accolade was when a company of Guides was despatched to assist at the Paris Peace conference and allowed to witness the signing.

Also covered are a range of examples from children’s diaries. Yves Congar is quite a well– known teenage diarist whose family endured the whole war in occupied Sedan. He describes the privations and horror visited on occupied France by the Germans. Also included are the writings of East German Piete Kuhr which made her a lifelong pacifist and damaged her relationship with her jingoistic mother. We also hear about the survivors of the Lusitania, the Silvertown explosion and those who survived the fighting, including Newfoundlander Pte Tommy Ricketts VC, at the time the youngest VC living.

It is usual practice in war for belligerent nations to intern so called enemy aliens, but many will be shocked to read the appalling treatment meted out to those in Canada, of all places. Included among them were ‘enemy’ aliens from the Ukraine fighting with the Entente despite the British Government reminding Canada of the fact. In more recent times, Canada has been somewhat ‘embarrassed’ by the subsequent exposure of the treatment and later deportation of their internees. The book's cover includes the phrase; ‘What was done to us was wrong’. I doubt many would disagree. What a terrible introduction to life.

I have to applaud Dr Newman for this book. The research to select her examples, and then decide on those she had to omit, must have been overwhelming and at times heart breaking. Some of the reminiscences are frankly shocking. This is a work which should be compulsory reading for any who are thinking of starting or going off to fight in a war!

[This review first appeared in the October 2020 edition of Stand To! the journal of The Western Front Association which is published three times a year].