For King and Another Country: Indian Soldiers on the Western Front 1914-1918 by Shrabani Basu 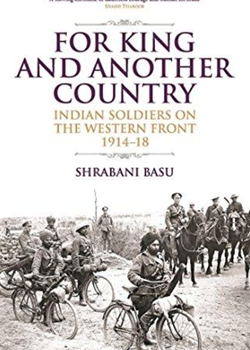 Shrabani Basu’s work on the Indian Army - not to be confused with another book of the same name about a Second World War fighter pilot in the RAF - is, unsurprisingly given her background in journalism, ‘populist’ in style and approach and largely driven by personalities and anecdotes. It is certainly not a detailed analysis of the Indian Army’s structure, its command or its actions and performance on the Western Front. For that readers need Gordon Corrigan’s excellent Sepoys in the Trenches or George Morton-Jack's more recent The Indian Army on the Western Front (surprisingly not listed here in the bibliography). It is not that Basu’s is a bad book, far from it, but it offers little more than an introduction to a vast subject, and one which has been under researched both in Britain and, apparently, India.

Amongst the fascinating surprises are details of the strong and effective network of affectionate official and civilian support for the Indian Army on the Western Front which developed in both India and in Britain.

Inevitably, and I believe quite irrelevantly, Colonel Reginald Dyer’s gross post-war ineptitude at Amritsar is drawn into the book’s conclusion. Here, it seems to be deployed as little more than a tool to underline an ungrateful Britain’s continuous perfidy towards India.

The author is more in tune when she states that the soldiers from India:

‘... had done their duty and served their Sarkar (one in authority particularly a land owner), but found they had returned to a changed land. They had expected to be hailed heroes, but no one really cared anymore.’

How true of many soldiers of every race and religion in the British Empire - and that included the men indigenous to the British Isles - who returned from the Great War, as indeed it was of the surviving combatants of every other nation involved: be they volunteer, conscript or pressed man alike. There are those who would argue that the author’s assessment holds true for veterans returning from any war in any age.