The Indian Army on the Western Front: India’s Expeditionary Force to France and Belgium in the First World War 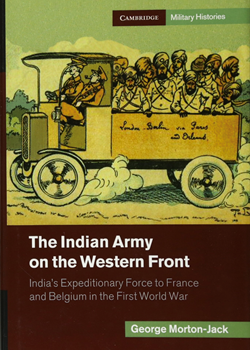 To subvert a review about a new book with lengthy opinions on a fifteen–year–old work on the same topic is almost certainly poor reviewer’s protocol. However, since the shelf of new books about the Indian Army is virtually bare I will ignore polite convention. Like Gordon Corrigan’s highly–praised Sepoys in the Trenches (published in 1999), George Morton–Jack’s The Indian Army on the Western Front seeks to, and succeeds, in placing the performance of the Indian Army in 1914 and 1915 in accurate perspective. Morton–Jack’s book costs too much of course – but then its the offering of an academic publisher. That said, while £60.00 may seem an expensive corrective to accepted history, interestingly new copies of Corrigan’s work are currently on offer at almost £90.00 and only two of some eight copies listed on Abebooks are listed for less than £50.00 although a new paperback edition is rumoured.

[Note from the Digital Editor: Softback copies of 'Sepoys in the Trenches' are available for under £5, hardback for £12.]

The Indian Army on the Western Front has had a pretty raw deal from British historians.

From a study of the first two volumes of the Official History one almost remains unaware of the deployment of two Indian Divisions in October 1914 between the left of the II Corps line and the right of IV Corps at a critical point during First Ypres. It seems clear that the ever imperious judgement of the Official Historian was, and remained, fairly negative in regard to ‘native troops’ during the writing of the books. The reality was of course that the ‘Home Army’ had always judged the Indian Army as inferior – early in his career in Spain, Wellington was regularly, and critically, described as an ‘Indian Army’ officer. Hence, from anecdote alone, it has become far too widely accepted that the deployment of Indian troops alongside the BEF. was a foolish error.

Both Morton–Jack and Corrigan effectively offer a corrective to the popularly established views that the Indian displaced ‘mercenary’ army performed poorly in Europe and could not deal with the winter weather on the western front. To that you can add the judgements that it lacked tactical awareness of ‘modern fighting’, suffered a highly disproportionate rate of self– inflicted wounds and that its ‘native’ troops were incapable of standing up to shell fire. Whilst fully capable of defining the Army’s true faults, both authors demonstrate that much of this self–serving and frequently ‘received’ opinion which has been handed down was myth. The fact was that the Indian Army was a different Army; unlike the BEF it was a home army. Although as unprepared as any in 1914 for a ‘modern’ war, long experience of warfare on India’s fringe borders built valuable experience in small–unit tactics (which it deployed with great success in Flanders).

The Indian Army was no more ‘a perfect thing apart’ than was the BEF – for whom such a claim was once made and which has been regularly and, I believe, incorrectly parroted. Neither author attempts to defend the indefensible – leadership by a corps of over aged senior officers, most of them place men promoted through length of service rather than merit. It also suffered from the short sightedness of a stuffy and ineffective Viceroy, a dated organisational structure and method of reinforcement totally unsuited to a modern war in Europe. I consider Gordon Corrigan the more compelling author; his knowledge of military matters is as usual reflected on every page. Equally, barrister George Morton–Jack’s deeply researched writing is accessible and rewarding. Corrigan, the ex–Gurkha officer, writes of practicalities, Morton–Jack arguably offers a more detailed evaluation of the Indian Army as an entity – its strengths, weaknesses and administration.

Both these books are important correctives to our lazy view of the Indian Army at war in 1914 and 1915. 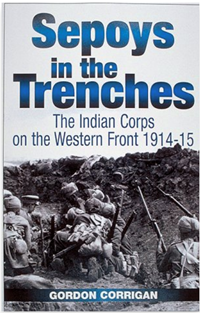 That I prefer Sepoys in the Trenches by some distance does not diminish the quality of The Indian Army on the Western Front or its author’s efforts to tell a fascinating story.

This review first appeared in the January 2015 edition of Stand To! the journal of The Western Front Association. Members receive Stand To! three times a year and our in-house magazine Bulletin three times a year. Digital Members receive these in digital form and have access to them online. All members have access to the Stand To! archive comprising all issues from No.1 bar the latest three.