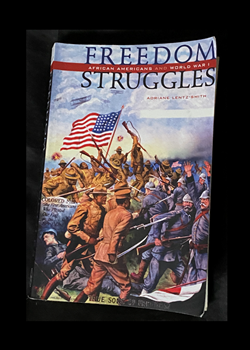 In this influential 2009 Harvard publication Adriane Lentz-Smith provides a long overdue appraisal of the experience of African American soldiers in the American Expeditionary Force in 1918 and 1919. In doing so the lives and hopes of black Americans are set against the world context of white empires that ruled large swathes of the globe, Jim Crow laws in the US and severe and often violent suppression of the black population by white supremacists in some US states and towns. As well as this global context, historical scene-setting is required, especially for those not familiar with American history. It helps to understand that the US, like Britain, France and Germany, had empirical designs of their own through wars initiated in Cuba, Puerto Rico and the Philippines while continuing to suppress their own indigenous populations and fighting punitive border wars with Mexico.

Despite the north winning the Civil War, it was the south who led the country to keep its black population suppressed, which was codified into law by the US Supreme Court with Plessy vs. Ferguson in which the decission was upheld to racial segregation, indeed Woodrow Wilson believed that ‘segregation increased the comfort of black and white alike’ while Senator James K Vardman expressed his fear that if you "treat a Negro (sic) like a man he will think himself a citizen. It is hardly surprising that in this atmosphere lynchings grew in number, with 105 in 1905 and backed by whites rampaging through and destroying ‘negro’ (sic) communities in Atlanta in 1906 and Springfield in 1908".

The son of a black servant girl and any one of the three young sons of the white family where she worked, Ely Green floated between the white and black communities. Identifying as black, Ely loathed the terms ‘nigger’ and negro’ being used after having been challenged in a shop when buying ice-cream with some of his white boyhood friends when nine years old. Many years later, waiting in line to be demobbed after 18 months in France he refused to allow the term ‘negro’ to be written onto his demob papers.

It was against this background of discrimination and prejudice that African American soldiers, who’d fought for the US since the Revolution and in its wars since, and African Americans would now enlisted and fight. Black men, like Ely Green and Harry Haywood, enlisted because of their desire to be Americans who could be proud to be black and recognised as American citizens under the American flag. In his diary, Ely wrote that he would go to France ‘if I have to swim there’. Having lived in the south with its mutinies, he felt no happier in the north after staying in Chicago where he had been expected to become one of the segregated ‘black folks’.

France appeared to show no colour-line. When they had the rare opportunity to fraternise with the French some came to dream of “a life unfettered by segregation” in a “truer more open democracy”.

Ely Green returned to the US “more dogged, more resourceful and more certain that he deserved respect … for the right of law”. He escaped death at the hands of white police and others, though not severe beatings and being shot at. If anything, after the war the lines between whites and blacks “grew more rigid”. The Ku Klux Klan had 4 million members by 1924. And between 1919 and 1939 there were 579 lynchings, of whom at least ten, in the year after the November 1918 Armistice, were African American soldiers.

‘Freedom Struggles’ is an important text.

Adriane Lentz-Smith provides a thorough insight into state sanctioned segregation in the US revealed by the First World War. In doing so she sets the scene for World War II, where African Americans began to 'demand' rather than simply 'hope' for democracy and recognition at home as citizens not supplicants. She also importantly establishes the context for for the civil rights movement that was to come.

Adriane Lentz-Smith is Associate Professor of History at Duke University and senior fellow at the Kenan Institute for Ethics.