Fritz and Tommy: Across the Barbed Wire 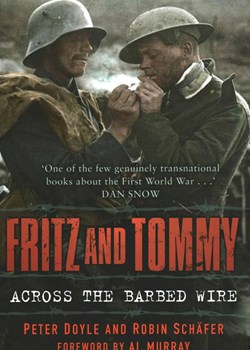 By Peter Doyle and Robin Schäfer

Military historian (and ‘go–to’ television presenter ‘hunk’) Dan Snow’s reputation is now, apparently, such that his view, of Fritz and Tommy as ‘One of the few genuinely transnational books about the First World War’, is run as a talisman above the book’s title.

There is certainly much in Peter Doyle and Robin Schäfer’s book – an exercise in contrasting and comparing the experiences of Britain and Germany soldiery in the Great War – that makes compelling reading. The authors/editors underscore the large commonality of thought and experience of combatants on both sides of the wire – although of course no single man’s experience of war could ever be the same as another’s. And, interestingly, national traits do seem to out themselves in these letters. Whilst not a judgement, from my own evaluation of German writing about the Great War – personal accounts and fiction – the tone of German writers remains frequently different to that of British authors. As the book shows, those who wrote from the BEF’s perspective seem to me to be largely more stolid in their writing, more accepting – if grousing – of conditions and of ‘just getting on with it’.

Overall, German writing and authorship on the Great War is frequently more consciously heroic, patriotic, more recognising of the need for sacrifice and, at the beginning the war, more imperialistic in tone than that of Britons. Yet rarely, in any of these letters home – a duty which in itself must have dictated deliberate self censorship as well as concern for the officer’s blue pencil – do correspondents show the weakness of spirit, diminution of resolve or the self pity many of them must have felt.

As well as the works of authors as significant as J C Dunn, Guy Chapman, Rowland Feilding and Ernst Jünger, the authors have selected British and German front line correspondence drawn from an impressive selection of archives, books and private collections. Chapters are logically grouped in six key areas of activity and consequence: The Armies/Die Armeen, In the Field/Im Feld, Morale/Die Moral, Battle/Die Schlact, Wounds and Death/ Vewundung und Tod and Blighty/Die Heimat. Editorial input – and the links between the letters – is judicious, valuable and in context and the in–page pictures are well chosen.

Fritz and Tommy provides far more gripping reading than the average hackneyed and ill– contextualised lazy jaunt through the archives represented by the ‘voices of…’ volumes.. The views of serious military historians like Paul Reed, ‘essential reading’ and Spencer Jones, ‘fascinating, thought provoking and frequently touching’, inside the book jacket are far more compelling than the marketers’ pull quote from Dan Snow on the cover. This is a book whose content is likely to be pillaged by future writers.