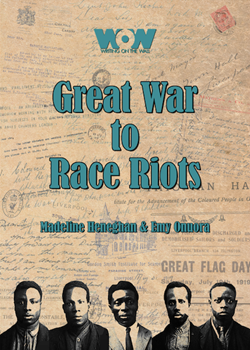 Writing on the Wall

Published by Writing on the Wall 2017

We are told of how the research came about to produce this book and are given a succinct history of Liverpool’s maritime trade and how it at the forefront of the slave trade from 1700. Gradually non-enslaved blacks, men and women, found work in Britain as servants, labourers and seamen. War in 1914 brought opportunities and eventually created pressures that became violent as people became desperate.

The authors, ‘why would subjugated peoples fight, work and raise wealth for an oppressor nation in a war that was not of their making? (p.31) They go on to explain that in the Caribbean, the racism felt towards black people was not as keen as it was once they had left their homes. They were not motivated by patriotism or nationalism, but rather an opportunity to ‘escape the poverty or irregular employment, low pay, injustice and casual violence.’ (p.32) This sentiment could t osome degree apply to the lowest paid in the most precarious jobs in Britain too. The feeling amongst the black population was that they would  rewarded with moves towards self-governance and home-rule.

There was reticence to arm black men who would be used to fight a white enemy as it undermined the view of white supremacy. It took King George V to intervene personally to see the establishment of the British West Indies Regiment (BWIR) in 1915. A total of 15,600 men served in the BWIR during the war. Two-thirds came from Jamaica, with the rest from Barbados, Trinidad and Tobago, the Bahamas, British Honduras, Grenada, British Guiana, the Leeward Islands, St Lucia and St Vincent. Men from the BWIR won military honours, including five Distinguished Service Orders, nine Military Crosses … in all 166 were decorated. African soldiers served on the continent as couriers and labourers, men from Nigeria, The Gambia, Rhodesia, South Africa, Sierra Leone, Uganda, Nyasaland, Kenya and the Gold Coast. 55,000 served, 10,000 were killed.

In December 1918 around 8,000 soldiers of the BWIR stationed in Taranto in Italy had been waiting for several months to be demobilised and given a passage home. The last straw was when they were ordered to clean the latrines used by Italian soldiers.

The 1919 race riots are best understood in the context of the huge social unrest and working class dissatisfaction that was expressed, not only through intensifying racial tensions and violence, but in mass strikes, protests and calls for self-governance and in colonised lands’. (p.49)

Black men in work were seen as an Impediment to opportunities for white men. There was a systematic campaign of discrimination, the imposition of a colour bar and the scapegoating of black labour and the black community (p.51)

Black ex-servicemen, seafarers and factory workers in Liverpool who were either left destitute or stranded because few companies would employ them and even more threw them out of work under pressure from disillusioned working class whie men who had been demobbed and were looking for jobs. (p.10) Violence erupted between April and August 1919.  Men were killed, black and white. The violence was not restricted to the Liverpool,  London, Glasgow and Cardiff, Newport and Barry saw much the same. Nor were race riots on demob rescrited to the UK - the US saw far more terrible outpourings of anger and hatred. In Liverpool, in April/May 1919, 120 black workers who had been employed in sugar refineries and oil cake mills were sacked over the course of a number of weeks as white workers refused to work with them. (p.51) On 13th May 1919 600 black men, British soldiers and sailors, were reported as destitute to the Lord Mayor of Liverpool. These men had served in the Cheshire Regiment, Third King’s Liverpool, 26 Middlesex, Gold Coast Regiment, King’s Own Royal Lancashire and the Royal Engineers.

The authors identify ‘deeply entrenched institutionalised racism and newspapers pushing inflammatory ideas’ as the problem (p.11). They go on to say that ‘the black community across Britain’ was ‘ portrayed as a criminal class, both aggressive and ‘childlike’ and, most vociferously, as sexual predators’. (p.12)

Though a specialist piece of research into the plight of black people as British society adjusted to the aftermath of the Great War, the book has resonance because of similar behaviours and resulting riots took place around Britain - and on a far larger scale in the US.