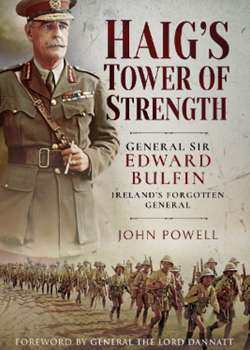 My grandfather would have called General Edward Bulfin a man with ‘ballast’; a workman, capable, unshowy and determined. Rather than earning his commission at Sandhurst, he entered the army from the militia, did not attend Staff College and was an Irish Roman Catholic in an army essentially commanded by Protestants.

Unfortunately like other some other senior officers, including Plumer, Bulfin left few diaries or papers. Consequently, as General the Lord Richard Dannatt notes in his foreword, this makes Powell’s book ‘a triumph’.

Bulfin’s varied experiences of war were matched by few others in the senior ranks of the British Army. He was a highly capable soldier in the Boer War (as a brigade major and DAAG). As a brigadier general he commanded 2 Infantry Brigade before commanding the 28th and, later, the 60th Infantry Divisions; the latter in France, Salonika and Egypt. Under Allenby, he was GOC XXI Corps in Palestine, Lebanon and Syria and acting GOC of the Egyptian Expeditionary Force and GOC XX Corps. Acting on principal, as an Irish Roman Catholic, he refused a posting to Ireland.

Bulfin’s soldierly judgements and willingness to lead from the front in late 1914 were important. He was considered ‘influential’ on the Aisne and on 30 October 1914 he led Haig’s small reserve to plug the gap when the British lines around Ypres at Zandvoorde were smashed. It is now rarely noted that, while the defence of Gheluvelt on 31 October 1914 is often noted as the most critical day for the British Army at Ypres, many, at the time, thought that holding the line on the 30th more important than the next day’s action. Not least, some judge the Germans’ route to Ypres via Zandvoorde offered a better option than an advance down the Menin Road the next day could have been.

Sadly, Bulfin, like soldiers of other ranks high and low, came under Gough’s oppressive and repressive command. He ‘took the rap’ for the inadequacies of his subordinates at Loos. Sent home, he trained a division in the UK and led it in France and in the gruelling, unhealthy climate of Salonika. Like his commander in the Middle East, Edward ‘The Bull’, Allenby, Bulfin found his true metier in Palestine. Although Bulfin considered Chetwode, his fellow corps commander, Allenby’s favourite, it was essentially Bulfin who broke the Turkish lines in the Third Battle of Gaza and gained the victory at Meggido.

The Middle East is by no means a forgotten battleground – how could it be with T E Lawrence’s own literary offerings and the many who have written of him. Nevertheless, relative to the Western Front, the operations of the British Army in that theatre still remain relatively obscure – even to those with a serious interest in the Great War. The battlefield, its conditions and the problems which arose from them were very different from those on the Western Front. Bulfin mastered them all.

This review first appeared in the January 2021 edition (no.121) of the journal of The Western Front Association Stand To! Members receive each of our journal Stand To! and member magazine Bulletin three times a year. Digital Members receive this electronically. All issues are available to members via their digital login.