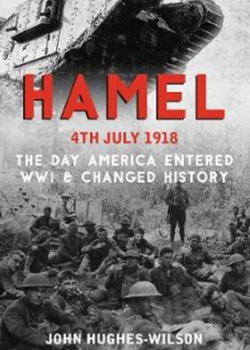 This is a somewhat odd book about an event which normally takes up no more than a chapter in many histories. Nevertheless, Hamel was undoubtedly a significant action, part of what the Australians called ‘peaceful penetration’ of the German lines which provided a blueprint for the assault at Amiens a month later.

In short chapters, Hughes–Wilson takes us through the background of the Great War, the German 1918 offensives, biographies of Rawlinson and Monash and the character of the British, Australian and German forces before covering the concept for Hamel, its planning and the attack itself. Also covered is the last–minute saga of Pershing’s attempt to stop the Americans of 33rd Division from taking part and a brief history of the tank.

Although the author provides numerous quotes, he offers no source notes or references. Equally, the book is by no means error free and indications are that it was hurriedly written. Examples of this are that British divisions were reduced in February 1918 from 13 battalions (including the pioneer battalion) to 10 and not from 16 to 12; Whippet tanks did not take part in the Hamel attack and the Mark V tank was not ‘mechanically reliable’, just slightly less prone to break down than its Mark IV predecessor. Had the author looked at Cambrai, he would have found that many of the techniques used at Hamel had been employed in November 1917. On the other hand, the maps are clear and the text an easy read although the real puzzle remains – at which readership is the book aimed?