In Which They Served by Richard Cullen 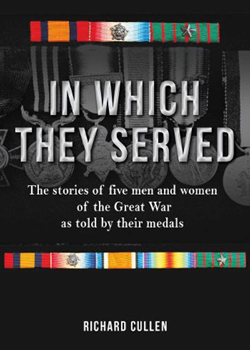 This unusual book is about five very different people told through the story of their medals. The author started collecting medals as a schoolboy, but it was only after his retirement that he decided to start researching the lives of their owners. The first chapter covers Richard Trevethan who became an airman after seeing service at Gallipoli with the 6th Battalion South Lancashire Regiment. Trevethan became lifelong friends with Clement Atlee – the OC of B Company. Though his military career was successful his personal life was marred by tragedy, his two sons pre–deceasing him.

Lucie Toller was already a nurse when she joined Queen Alexandra’s Imperial Military Nursing Service (QAIMNS) in 1904 and had served both overseas and at home by 1914. One of only 138 women awarded the MM she also qualified for the Mons Star and Bar! Lucie served throughout the war on the Western Front. Her professional career seems to have ended on a sour note after she broke her leg while on duty.

Gerald Andrewes was a 41–year–old insurance broker when he volunteered for war in 1914. He was awarded the Queen’s South Africa medal with several bars for service in the Boer War and in 1914 qualified for the Mons Star. He delivered supplies for the ASC and later drove ambulances for the French. He returned to his practice in Birmingham, later marrying a widow, Ethel Marion Chavasse. He became a loving grandfather, well remembered by Ethel’s family. They had a comfortable and happy life together until his death in 1955. Ethel lived until 101.

Emily Kemp is the best documented subject. The youngest of five sisters, her younger brother became the first Baron Rochdale. The family was both ‘very well to do’ and philanthropic. Emily was an early student at Somerville College, Oxford, travelled extensively in China and was a capable artist – examples of her work are included in the book. When the war began, she was 54 years old and put her private income to good use in funding a volunteer hospital. She later worked at a canteen and rest rooms in Verdun. Her philanthropy continued after the war with the dedication of a chapel at Somerville College.

The last subject is William (Jack) Nunn who qualified for the Mons Star and later won the MC and a Bar. Two of his elder brothers had joined the army and he followed suit, enlisting as a boy soldier in 1909. Before the war he gained two Good Conduct badges and four inches in height. Arriving on the Western Front in October 1914 he was commissioned and awarded two Military Crosses. One of the Nunn brothers wrote home often, and the author was given access to the letters, which are well written and perceptive about the conduct of the war. The Nunns were a fortunate family: all four brothers survived the war.

Apart from Emily Kemp, personal details about the other four were sketchy to say the least and the author has done a remarkable job filling in the gaps from public records, war diaries and where possible the writings of others that either served with the same units or were in the same places.This is a different approach to telling a different, more personal story of the war. Recommended.