Norwood Cemetery and the Great War: Reflections of Military and Social History by Peter Hodgkinson and John Clarke 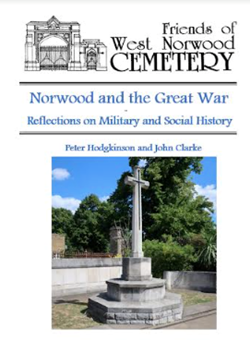 This is an unusual and fascinating book about the First World War. It is an exploration of community and commemoration. However, the story is not told through the activities of the living but instead through the sacrifice of the dead. The community in question is commemorated in one of London’s large cemeteries – Norwood Cemetery. The story of wartime loss and sacrifice is constructed around the maze of graves, memorials and tombs in this south London cemetery, described as one of the ‘Magnificent Seven’ major Victorian cemeteries in the capital. There have been studies of those named on specific war memorials or those commemorated by Commonwealth War Graves Commission headstones in the past. There are 141 of these at Norwood.

What appears to make this study unique is that the authors, Dr Peter Hodgkinson and John Clarke, have also studied normal, civilian graves for any references to those who died in the Great War. This includes private family graves (where members of the same family were buried) or public graves (in which spaces were sold individually – at ‘war rates’ of 10/- a plot). By 1914, there were already 33,000 graves in the cemetery. Bereaved families looking for a focus for their mourning added inscriptions to existing gravestones and memorials reflecting the loss of a loved one. They estimate over 460 men who died overseas between 1914 and 1919 were commemorated on family graves - there were very likely more. This is where Hodgkinson and Clarke’s work has been done.

The result is impressive; 600 pen-portraits of those who died as a result of the war and are commemorated in some way in the cemetery. Just over two-thirds of those buried or commemorated at Norwood were born within five miles of the cemetery. The book represents a community of the dead and the impact they had on those around them and wider society.

The gazetteer of pen portraits provides the core of the book. Across 400 pages the reader learns of the lives of those who died during the war or afterwards from wounds or sickness and were commemorated at  Norwood. The pen portraits are moving. They bring the vast sprawl of the First World down to individual and personal loss.

There are the Cundall brothers – their parents’ only sons. They enlisted as privates on the same day in August 1914. Stanley was a 2nd Lieutenant in the Yorkshire Light Infantry when he died. He was killed in 1918 at the Hooge Crater when his battalion was shelled by its own artillery. His brother, Cecil, had been killed the year before. A captain in the Inniskilling Fusiliers by 1917, he was shot at close range on the Passchendaele Ridge and died instantly.

Wilfred Moody, a private with the Royal Fusiliers, was killed on the Somme in 1916. He had ambitions to be a priest and had been a popular student at Leeds University where he took a Classics degree.

Doris Swanston left her comfortable life and joined the Surrey Voluntary Aid Detachment in 1916. She died in February 1919 – a likely victim of the flu epidemic. Remarkably, her father served as a private with the Royal Fusiliers between 1915 and 1918. He had volunteered aged 48. The detail in these hundreds of mini-biographies is fascinating.

The authors are anxious to give credit to the late Eric Smith, upon whose work Hodgkinson and Clarke have based their research. Smith performed a labour of love between 1967 and 1980. He recorded the inscriptions on thousands of monuments and graves at the cemetery. His research, 29,000 6 x 4-inch cards are now held by Lambeth Council. For Smith, it was also a race against time. As he recorded many of the inscriptions, the bulldozers from Lambeth Council were clearing parts of the cemetery with many memorials were lost forever.

The authors are well-equipped to deal with the large amounts of data thrown up by their research and that of Eric Smith. Hodgkinson is a Consultant Clinical Psychologist specialising in trauma and a prolific author on the First World War. He is no stranger to using data to support his arguments. Meanwhile, John Clarke is a former administrator and medical librarian, now a freelance writer. He is the historian of Brookwood Cemetery with several publications to his credit. He is also deputy chair of the Friends of West Norwood Cemetery. They tease out some fascinating information from the inscriptions. Nearly 40 per cent of the commemorations on family graves are of servicemen whose bodies were never recovered – the inscription serving in place of an actual grave. Thirty-one sets of parents lost two sons and one family lost three of their six sons. Two-thirds of the actual burials in the cemetery were the result of deaths from sickness rather than wounds.

The book provides an unexpected but useful brief introduction to the First World War. Several brief articles break up the gazetteer of obituaries. Some provide contextual information about the war – a timeline of the war, and maps of the fighting fronts including the Western Front, Gallipoli, the Ypres Salient, Mesopotamia and Palestine. There is a short explanation of the structure of the British Army during the war. Others are relevant to the area around the cemetery and those commemorated there – the Upper Norwood Volunteer Training Corps and the Lambeth and Area Auxiliary Hospitals, for example. The eclectic mix of mini-articles provides some interesting insights into some of the less-explored areas of the war on the home and fighting fronts.

In an article on ‘The State of the Nation’s Teeth’, the reader learns that no dentists went to France with the BEF in 1914. When Sir Douglas Haig was plagued by a raging toothache in September of that year, a dentist had to come from Paris. Hodgkinson and Clarke highlight the important role of the clerk in Edwardian society – a significant number of those commemorated at Norwood had this pre-war occupation. The authors describe the clerk as ‘… men perched on high stools bent over desks while clasping pens poised over vast ledgers’. They lament the loss of the stalwart of pre-war commerce and wartime military recruitment as a ‘lost occupation'. The sinking of the Lusitania in 1915 is not overlooked – four victims are buried or commemorated in the cemetery.

Localism and local commemoration of sacrifice is now considered a central element to understanding the nation’s response to the war of 1914-1918. Hodgkinson and Clarke have provided a fascinating addition to the literature. They have performed a delicate balancing act on two fronts.

Firstly, they have placed death and commemoration in its rightfully local context without losing sight of the broader perspective.

Secondly, they have produced a book that is poignant without becoming maudlin. In essence, their work shows how the waves of war and loss break a very long way from the battlefield.

The dead of Norwood Cemetery can now take their place in the historiography of the First World War. This book is thoroughly recommended for anybody with an interest not just in the battlefield but in the communities servicemen left behind and to which some never returned.