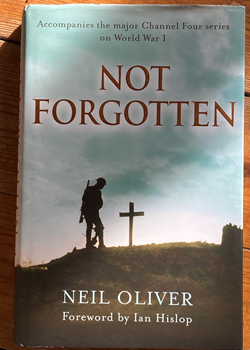 Accompanied the major Channel Four series on World War I

Neil Oliver with a forward by Ian Hislop

Though a companion to a Channel 4 TV documentary series on remembrance originally presented by Ian Hislop, the accompanying book was written by the then less well known TV Presenter and archaeologist Neil Oliver. Sometimes ‘the book of the series’ can be little more than a clumsy transcript from the series, with commentary and interviews poorly transposed and shots taken during production added. Not Forgotten though is something very different and unexpected. Ian Hislop presented the TV series; Neil Oliver wrote the book. The two complement each other and stand alone.

The title of the book is disingenuous; far from being just a laudable, but predictable and clichéd tick-list with notes, Not Forgotten is a wonderfully eclectic mix of reflection on memory, remembrance and First World War memorials visited. There are some, ‘must see’ trips to the Cenotaph and Westminster, of course, but this is a Neil Oliver's journey, with a constant nod to his Scottish roots and home, and his grandfather who served in the Great War. Neil Oliver’s grandfather survived and said little. He died before the young Neil was old enough to ask the questions he since wished he’d asked.

How family’s remember their grandparents and ancestors is one theme in Not Forgotten - as are reflections on the nature of remembrance and the different ways we commemorate those who died in war. We get to the Great War via Theopoli, Falkirk, Culloden, Waterloo and the American Civil War.

We know Neil Oliver best for his perambulations around the coast of Britain, Ireland and beyond. We actually visit the coast to learn of the men returning to the Isle of Lewis who died on 1st January 1919 when the boat taking them home sank in bad weather. Then, from his home in Falkirk, the author ventures far and wide, as often to the interior of the British Isles to remember men of valour awarded the VC posthumously, women too, as well men shot and as a result of the first air raids, and the youngest serving soldier killled - he was 14, as well as younger children, who were killed in the first air raids and are remembered as well.

Neil begins at the Cenotaph designed by Edwin Lutyens to favour no single faith, with a line by Rudyard Kipling who lost his only son John to the war. We're told of the five sons of the Soul family lost - The Western Front Association through browsing the Pension Record Cards and have found a further three families who suffered so tragically.

We visit the most iconic sites and landmarks of the First World War from the cemetery of Tyne Cot to the Menin Gate. We learn about the ‘thankful villages’ -  those few villages where no man who served was killed. We are introduced to the sculptures of Charles Sargent Jagger and we visit the Chattri War Memorial on the Downs north of Brighton where 30 Sikh and Hindu soldiers who were cremated here are remembered.

In one chapter, we learn the story of the Unknown Warrior, how the Reverend David Railton had first approached Westminster Abbey with the idea of a tomb to an unknown warrior in 1916 and that the Rector of the Abbey had passed this suggestion on to Buckingham Palace. We learn how on the 7th of November 1920 Brigadier L J Wyatt went into chapel at St.Pol to select one unknown body from six or more.  It was then brought to England. At Westminster King George V stood at the coffin of the Unknown Warrior along with 100 recipients of the VC, a thousand women, a hundred nurses and as well as many Field Marshals.

This is a far more enjoyable read than you may be led to believe by either the title of the book or its provenance.

Neil Oliver is an informed writer and makes for an easy read. Not Forgotten would make a suitable, tentative introduction to the First World War for someone inclined to the broader picture, the personal stories, not the military history. Through reading Not Forgotten you gain some understanding of our landscape which is dotted everywhere with memorials to those who served and died during the two world wars of the last century.

Neil Oliver feels that the First World War brought the 19th century of the Victorian and Edwardian eras to an end. Is he right? And might we look back on the Covid-19 pandemic of 2020 and feel that this finally brought the analogue world and habits of the 20th century to an end and ushered more of us into a 21st century dominated by digital?