Pandora’s Box: A History of the Great War 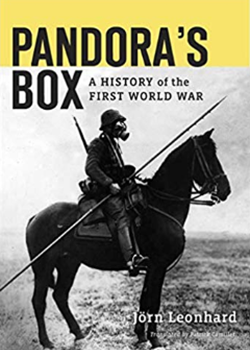 At two and a quarter inches thick, with 65 pages of notes and references, a bibliography of some 200 pages and a 35–page index, Pandora’s Box appears daunting. Nevertheless, Jörn Leonhard, Professor History at the University of Freiburg, offers an outstanding and newly–minted overview of the Great War: those who created it, served in and its panorama of complexities.

Aptly titled, the book first defines and explains the vast, byzantine political and ethnic problems unleashed in the Balkans and the consequent political, economic and military actions, national beliefs and planning for war. Leonhard offers neither lengthy analysis of individual battles lost and won – nor narratives – although their complexities, expectations, planning, objectives and often unforeseeable, inevitable, consequences, are clearly defined.

Leonhard here offers a multi–faceted, holistic view of the war, much of which has only been covered in single subject works. He ranges widely from war planning – or the lack of it – to strategic and tactical imperatives and overviews and evaluation of military, industrial, political, financial and social influences and of decisions and effects. He analyses much that influenced levels of endeavour – from civilian to soldier and from politician to industrialist as well as those whose lives were affected by nationality, race, politics and ethnic minority. He examines the effects of national and military attitudes, the growth of armies and the roles of science and industry.

On reading, it becomes clear that the author’s analyses, could – and probably will –lead to a pruning of works in this reviewer’s Library – and not simply of older volumes. Not least his depth of cohesive analysis is frequently more efficient, more cogent, than books specifically related to the individual topics he describes and evaluates. Not least of these is the early examination of the cockpit of the Balkans, of Austro–Hungarian ineptitude, bungling and unwarranted arrogance.

It is a lazy reviewer who quotes others’ reviews at length, but the space available in a Stand To! review allows little but the broadest overview of the length, breadth and skill of Leonard’s work. It seems therefore, worth noting both the book’s Amazon five–star rating and views of other critics They have noted the book as ‘… lucidly structured, focussed and dynamic’, written ‘fluently and judiciously’, offering ‘intellectual precision and thematic and containing ‘new information and fresh insights’. For once these back–cover validations must be judged sound – it is impossible for this reviewer to disagree with any of them. This is a book of vast research, coherent authorship and understanding and, despite its length, concise explanation.

Criticisms? I had been warned by a leading British military historian who recommended the book that, at times, the translation from German feels awkward and inelegant. It does, but this is a caveat to ignore in a book about the Great War which can only be reviewed as the most impressive single book on the Great War that I read in 2018.

[This review first appeared in Stand To! No. 114 February 2019. The journal of the Western Front Association is published three times a year and is available to members in print or digitally. Members also have access to the Stand To! Archive online via their Member Login. The archive comprises some 115 editions, over 1,600 articles and over 2,200 book reviews].