Publishers, Readers and the Great War: Literature and Memory since 1918 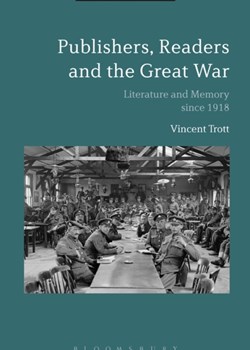 Publishers, Readers and the Great War: Literature and Memory since 1918

Yes. Publishers, Readers and the Great War, is an academic work. Its price is academic and unfriendly.  No doubt, sales to bejewelled libraries of universities will be profitable, yet this is a book which may well delight Great War bibliophiles at a happier price.

The overview of Great War writing post 1918, (un-statedly judged ‘amongst the best’) offers a fascinating overview of the influence of astute publishers, attuned to market moods and marketing techniques, and readership tends, which led authors to publishing successes.

Here, surprisingly, the work of the unfashionable and under regarded Gilbert Frankau, as well as the inevitable and risk-free choices Aldington, Brittain, Sassoon and Graves feature alongside Owen and others.

We also have an overview of the dissenting, disillusioned and disenchanted school of authors whose understandable antipathy to war. Although many have evaluated the work of these writers, many have made mountain of it. Personally, I am over disillusionment with the school of disillusioned authors, and if they have distorted history, so too have many ‘serious’ works on the Great War. Not least, the disillusioned earned the right to express their views.

In meeting veterans, it seemed clear to me that disillusionment was not primarily about the war they actually fought, but the failure of nations and politicians to heed the lessons of war to create a better and lasting peaceful future. And if that does not disillusion, it should.

Vincent Trott also returns repetitiously to the matter of creation and the influence of what he judges wartime ‘myths’ in Great War authorship. Most of those to which he refers seem to me to be ‘real’ myths. (Like the angels/archers who saved the BEF and the crucified Canadian.) I cannot regard reportage of mud, blood, fear, conditions in the trenches, sacrifice, and feelings of hopelessness under shell fire as myths. They are often clearly repeated facts in works written by those who were there.

The horrors of war were universal, shared, imprinted, remembered; not myths, not misconceptions. They were memories as real of those the Australian veteran who said, “Passchendaele mud? Yer should have seen the bloody Somme mud mate.”

There is much of interest, much to debate in this book and yet I judge its ‘cast’ of authors far too small, not fully representative of war writing and publishing as a whole after the war. Where are the authors judged by some as ‘secondary’, Ernest Raymond, V M Bates, Henry Williamson? Why is the fatuous, distorted, yet popular, Birdsong here rather than the magisterial 1961 novel by John Harris’ Covenant with Death?

Is this a harsh, unfair, judgment? Possibly, but at £80.00, few WFA members are likely to buy the book and be disillusioned by my opinions. But it is worth attempting to obtain a copy from your local library; if you have one, on interlibrary loan, if it works, or are not too convinced by my views on false mythology.