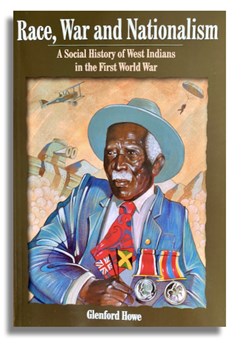 Glenford Howe has produced an important, well researched and thoughtful analysis on the black West Indian population of the British colonial islands of the Caribbean of the impact of British imperialism before, during and after the First World War.

Race, War and Nationalism is a pleasure to read. The quality and depth of the evidence-based research indicates that the book is based on a PhD thesis, yet this is no dry read. Often we are treated to shrewd summarises of the complexities of caused by the shifting relationships, attitudes, injustices, prejudices and exploitation of one group of people by another, such as this:

‘Centuries of alienation, indoctrination, creolisation and suppression of the remnants of African cultural practices had by the outbreak of war, created staunchly loyal black Britishers in the colonies.’ p1.

Like others across Great Britain and the Empire, with the onset of war, black West Indians (as well as white) came forward to enlist and to put their lives on the line for their ‘mother country’ - England, and for the empire of which they felt a part as British citizens - not vassals to be exploited as had been their history.

There are six distinct parts to the book:

Part one considers the development of working class consciousness in the British West Indies after slavery. Former slaves facing poverty, gruelling economic circumstances and the lack of opportunity. This was made all the more inequitable as black West Indians had no vote which at least may have allowed them to do something about their circumstances. Yet all the while black West Indians had been culturally aligned to the British Empire and Englishness through education, religion, language and habit.

Part two looks at the elite, with few exceptions white population, who owned the plantations, major business and ran the government who were determined to preserve the status quo in relation to their elite status, income, land ownership, influence and control. The underdogs, in other words the black civilians, were to be kept in their place.

Part three covers the coming of a war in 1914 and how it would impact and engage the peoples of the entire British Empire. Given their cultural and spiritual affinity to England and the British Empire there was a personal desire by black British West Indians to show that they belonged, that they had the commitment and desire to serve and to do so in a combat role. This was a  view mirrored amongst African-Americans in the US wishing to enlist and finding themselves confined to non-combat roles as labourers and stevedores.

Part four reveals the understandable anguish, hurt and frustration felt by black men in the Caribbean who struggled to understand a system where the attitudes and perceptions were that whilst a black person was as good as a white man. For example, in sports like boxing and cricket, through education as there were black doctors and veterinarians and in religion - albeit a non-conformist hybrid form of Christianity, and running their own and businesses. Why therefore could they not serve the British Empire in combat roles and having gained this recognition, get the vote too and have a role in a supposedly democratic system.

Part five looks at the war experience itself through recruitment, service overseas and demobilisation.

Part six covers the aftermath of war with demoblisation: the struggles and disillusionment of black servicemen in the ports of Britain, and in the West Indies which boiled over into race riots - something that was once again mirrored in the US with far higher and extreme levels of violence.

What we learn, as if in the 21st century we should not now know it by now, is that black people had then, as they have now, the same desires as any of us. When it came to news and publicity around enlistment black West Indians, like other citizens across the British Empire, wanted to prove themselves, to demonstrate their worth, to feed their sense of adventure.

Necessity had the War Office recruit across the West Indies. Though as ‘natives’ they were put on a lower rate at first. Pay equity was achieved, not out of any sense of fairness, but to preserve the empire as the pending backlash as men returned home after the war was seen as a threat to the stability in the colonies. Change was difficult to achieve. On the white side of the argument there was fear and debate but an inability to accommodate change … ‘The thought of blacks helping to kill whites … caused distress, especially among the conservative sections of the society.’ p.24  While on the black side of the argument men simply wanted to ‘Fight as soldiers to ‘reclaim their dignity and achieve self-fulfilment’. p.30 To do as they had been brought up to behave - in defence of the country, which saw itself as part of a united Empire where certain standards prevailed.

The barriers and excuses from the white elite such as that black troops would be too conspicuous on the battlefield, or that black men from warmer climates could not tolerate the cold wet north European climate are of course nonsensical - not least because of the presence of the Indian army on the Western Front, but also because the corollary was never applied - why were white men fighting in the heat of Palestine and Mesopotamia?

The only reason for keeping ‘natives’ off the front line, and absolutely from being officers (in most instances) was for fear of undermining the white British supremacist edifice on which the British Empire was built. Black men (and women) could stand the cold and wet as well as anyone else if they were properly clothed, fed and housed - something which did not happen in the Seaford Training Camp, not when a troop ship from Jamaica was diverted to Halifax or Indian troops found themselves on the Western Front in the first autumn and winter of the war inadequately clothed. The black body was found to be just as prone as the white to or close to frostbite, trench foot and pneumonia and illness brought on by poor nutrition, housing and treatment.

When it came to recruitment the same incentives for black West Indians to enlist as men from  Britain: out of duty, to escape poverty, out of curiosity and a sense of adventure, as well as wanting to feel a part of something alongside their comrades, these wishes expressed in the press and posters. But in the colonies of the Caribbean there was also the burgeoning desire by black men (and some women) to prove their worth and so deserve fairness when it came to employment and the vote with a  status similar to others white or black across the British Empire.

As in Britain, poverty hindered the suitability of men coming forward to enlist at least as much, if not more so in Caribbean than in Britain where poor nourishment and lack of adequate protein in the diet left much of the population underdeveloped, undersized and prone to disease.

Poverty in the Caribbean, as elsewhere, would define the suitability of a person physically for duty ‘ … there was a relationship, however complex and unclear, between poor diet and irregular and overcrowded conditions, neglect and inadequate medical care, warfare and the harsh climatic conditions, on the one hand, and the high incidence of diseases like measles, measles, diarrhoea, pneumonia, dysentery, influenza and even malaria and typhoid’. P.102

50% of candidates for the British West Indian Regiment (BWIR) were rejected. They were educationally or mentally unsuitable, suffered from ill-health, suffered tooth decay and were undersized. Where further bias crept in was where black men who met all the criteria but were turned down regardlessly which was often (though not always) the case in Britain itself.

There was a colour bar to a commission, a matter that was taken up by the The Jamaica Gleaner 16 March 1917 arguing that where ‘people of every shade of colour had achieved so much there could be no bar to a commission’ - indeed. Doctors and qualified vets were turned away on one pretext or another.

Manpower shortages meant that soon Britain was seeking out men for a plethora of roles from across the Empire - men from the West Indies and South Africa were bound to make up the number. In time labourers on the Western Front came from ‘Egypt, the West Indies, Malta, Mauritius, the Seychelles and Fiji, as well as China, India and South Africa’. p.97-98. As African-Americans in the US, men enlisting as soldiers expected a combat role - most were reduced (in their eyes) to labour roles.

Sadly, in a world dominated by status and a well-defined pecking order based ostensibly on education and wealth, was also demarcated in shades of white through brown to black - indeed even in the black population shades of darkness defined a status of sorts akin to a highly visible caste system.

There was some integration and mixing. BWIR men shared hospitals with white soldiers - as they were considered more British than other black soldiers, say from South Africa.

After the war there were demob strikes and riots, and worst of all a frenzy of hate directed at blacks, indeed anyone who was not white-British, in the struggle to find employment for returning troops. In the Liverpool  riots of 1919: 24 year old Bermudian Charles Wotten, who had just been discharged from the navy - was thrown off a pier by a mob, pelted with stones and killed. p169 . Britains’s only post-war  lynching, David Olusoga would say.

There is so much to learn from ‘Race, War and Nationalism’ that is is worth a second and third read. It should be considered the starting point for anyone interest in the history of the experience for black British subjects from the Caribbean of the First World War and the context for what followed in the decades to come. 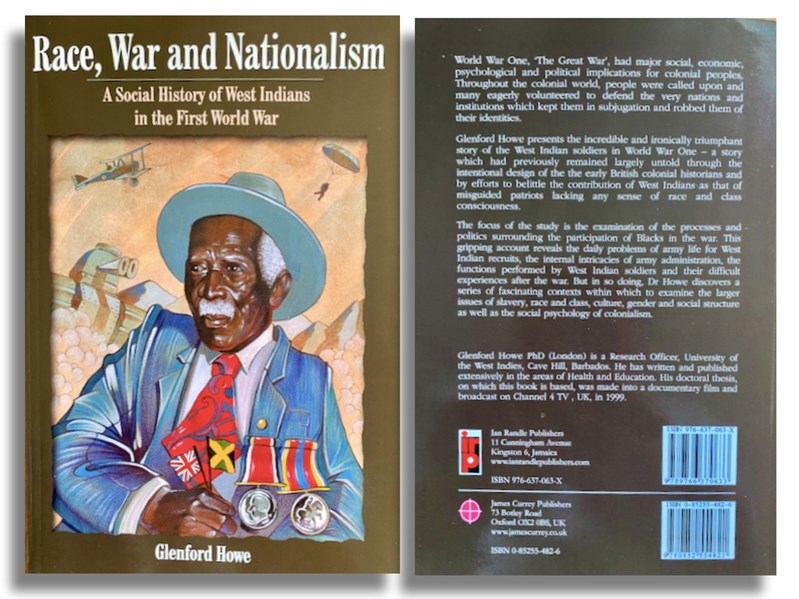