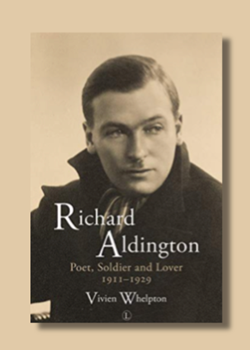 In Richard Aldington: Poet, Soldier and Lover, the author Vivien Whelpton explores in series of short intimately explored biographies, spread across the book that has Aldington at its core, the intertwining lives and work of a number of literary figures from the time, including Ezra Pound, Herbert Read, T.S. Eliot, D.H. Lawrence, Ford Maddox Ford and H.D (Hilda Dolittle).

Writing about the Bloomsbury Group collectively is straightforward as the characters involved are a group of fellow artists and writers who were friends, confidants and relatives who congregated around the same geographical spaces in London (Bloomsbury), and a farmhouse on the South Downs (Charleston). The issue for us regarding Richard Aldington and the influences on him is that the group or groups he belonged to, such as the Imagist Poets before the First World War, were more amorphous and Aldington himself drew on a wide, eclectic and changing circle of connections.

Most of Richard Aldington’s set, friends and acquaintances, like him, had to work for a living - their lives were more precarious than the Bloomsbury Group because they needed to work as magazine and newspaper editors, or publishers, to pay for their output. In Aldington’s case this meant journalism, criticism and poetry, and later novels and biography. His wider ‘circle’ embraced editors and fellow poets, journalists and authors.

To this end, it can mean that at times Richard Aldington: Poet, Soldier and Lover reads less like a biography of a single person, albeit a literary biography, and more like an anthology of intertwined articles, each one covering the people mentioned above, with the connection to Richard Aldington sometimes tangential. That said, for the person determined to understand the man, his background and behaviours to gain a sense of why he wrote the way he did, Richard Aldington: Poet, Soldier and Lover will form an important part of their reading. Of course, in turn, you may then want to find out more about each of Ezra Pound, Herbert Read, T.S. Eliot, D.H. Lawrence, Ford Maddox Ford, H.D. and others.