Sepoys in the Trenches: The Indian Corps on the Western Front 1914-1915 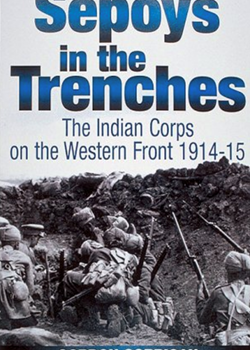 Who amongst us has not been intrigued and moved by the long lists of Indian names on the Menin Gate, or on the impressive Indian memorial near Neuve Chapelle?

This book tells the story behind those names, from the arrival of the first contingents from the sub-continent in the autumn of 1914 to the decision to remove the India Corps from the Western Front after fifteen months, so that by 10 November 1915 the last unit of the India Corps had gone - re-deployed to Mesopotamia. In examining the story of that fifteen months Major Corrigan looks at areas of Indian recruitment, the logistics of reinforcing and supplying the India Corps, the hardships endured and the comforts and medical treatment provided, desertion and press attention.

Useful appendices, maps, references and an index - in short a book after my own heart.

Review by Ann Clayton as part of the ‘editor’s choice’.