Sons of Freedom: The forgotten American Soldiers who defeated Germany in World War One by Geofrey Wawro 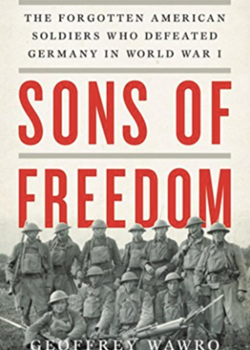 Currently not published in the UK.

Available via online shops. £20 from Abebooks.

Professor Wawro is the director of the Centre for Military History at the University of North Texas and joint editor, with Hew Strachan, of Cambridge Military Histories. Author of five books he is an historian of pedigree and controversy. His first publication attracted criticism from fellow scholars – including Lawrence Sondhaus chair of the University of Indianapolis History and Political Science Department. Certainly, this reviewer found some of Professor Wawro’s conclusions deeply unsatisfactory

Wawro’s introduction opens with his view that the Allies were losing the war and only America could save them. He accuses Britain and France of war–weary ineffectiveness which continued beyond war’s end and in indulging in a “... doleful culture of Remembrance”. He also suggests that

the Allies were motivate by the desire to “... subjugate German colonies’’ and undemocratic, imperially based, war aims and ignores Britain’s treaty obligations. He curiously describes the Miracle of the Marne, when the French had hurled back the German pincers encircling Paris  - and seems unaware of Moltke’s tinkering with Schlieffen’s plan. He also judges that “U–boats mocked British hopes’’ during the Royal Navy’s efforts to enforce the blockade of German ports.

The author’s stance is non–revisionist, one particularly critical of Haig and the French. Equally he makes no allowance for the strain and casualties sustained by the French Army 1914–16 and emphasises that the Nivelle Offensive failed because the French Army had “defeat and drunkenness coursed through its ranks’’. Equally he considers that the BEF became “increasingly mediocre’’ after the Somme, ignores the strategic imperatives of Verdun and Third Ypres – describing both campaigns as''witless ``.

President Wilson’s domestic problems, particularly with the Republican’s, his development of the 14 points, his relationship with Colonel House, the creation of a citizen army, expansion of the Regular and National Guard formations are however excellently explained. Likewise is his criticism of America’s army’s patronage, lack of professionalism, governmental slackness. He is excoriating in his opinion of Pershing’s adherence to his doctrine of rifle, bayonet and elan describing his disdain for the tactics of the Allies costing many American lives as “cruel”.

He also dismisses the BEF’s efforts to stem the 1918 Spring Offensives and notes of the ‘Hundred Days’ that “... much of the ground taken by the French and British would have been freely relinquished by the Germans” as a result of American action at St Mihiel. Perhaps inevitably Haig is personally blamed for the failure of US 27th and 30th divisions at St Quentin Canal – despite the plan being that of Monash who is never mentioned. Nor is the success of 46th Division that day and other British successes of the BEF mentioned which contradicts the author’s general narrative. The Canadians and Australians are lorded, the French derided throughout – even being blamed for the so called “Lost Battalion’’ debacle.

Wawro’s explanation of the brutality of Meuse–Argonne offensives, conditions, poor staff work, inexperience, congestion (much criticised by Clemenceau) great courage of officers and men are however clear and candid. His ethos is encapsulated by “... only the Americans were winning’’ by October 1918 and that the “... doughboys won the war by surrounding the German army in Belgium and compelling it’s surrender’’ contradicting the evidence that the AEF could not have achieved success without the efforts of its allies. (The bravery and sacrifice of the fighting officers and men of the AEF is never doubted by this reviewer.)

Notes are extensive, predominantly American though Liddell Hart and even Charles Repington are referenced as are John Terraine and Barry Pitt, whose analyses Wawro disregards. Maps are helpful, illustrations, good though small, include no images of the GOC’s except Pershing, Edwards and MacArthur!