Stoker’s Submarine; Australia’s Daring Raid on the Dardanelles on the Day of the Gallipoli Landing 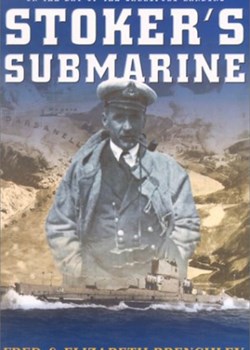 Most naval historians know that the first two submarines through the Dardanelles were commanded by Royal Naval junior officers, and were deservedly, awarded the V.C. What I did not know until now, was that the first submarine to penetrate the minefields of the Narrows, AE2, was an Australian Navy vessel.

Both AE1 and AE2 were assigned to the Australian Navy in 1914, having made an extraordinary submarine journey to Australia early in the year. AE1 was lost on their first war patrol. AE2 was ordered back to Europe and on reaching Mediterranean was diverted to the Gallipoli campaign. Dacre Stoker, who commanded AE2, was a phlegmatic Irishman, prepared to take on any challenge. That of navigating the challenge of The Narrows of the Dardanelles was appallingly intimidating. Rows of mines were laid across the channel, a current of 4 knots ran down the channel and an underwater current (unknown to them) of about 2 knots moved up the channel.

Although Royal Naval commanders were not prepared to risk the narrows, Stoker, to the approval of the Chief of Staff to the C-in-C, Roger Keyes, Commodore in charge of Submarines at the start of the war, was.  Sailing from Mudros on 25 April, AE2 navigated the minefields and emerged in the Sea of Marmara to carry out its mission to ‘run amuck’.

Whether it must be left to the reader, but what is clear is that the signal that it had reached the Sea of Marmara had a galvanising effect when it reached both Hamilton and de Robeck, who were facing the decision of whether to evacuate the ANZAC landings. History records that they did not, and it is a moot point as to how much AE2’s message influenced that decision.

The first 8 chapters tell the submarine’s story in detail; the remainder that of the imprisonment of the crew after AE2 after it was forced to the surface on 27 April 1915 and grounded. Stoker managed to reverse her and sink her in deep water so that nothing of importance could be revealed to the Turks. Finally, there is a listing, with personal accounts, of the crew of AE2, followed by an analysis of her discovery in 2007, and discussion of what to do with the wreck. (There is also an account of the disappearance of AE1 off New Guinea in the Bismarck Sea in 1914, and a personal account of the crew.)

All in all, a worthwhile publication which adds to our knowledge of the naval war in the Mediterranean in 1915, and must be recommended. 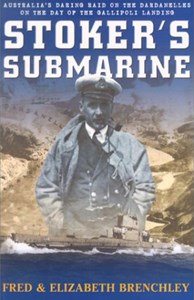 Stoker’s Submarine; Australia’s Daring Raid on the Dardanelles on the Day of the Gallipoli Landing by Fred and Eliza Brenchley. 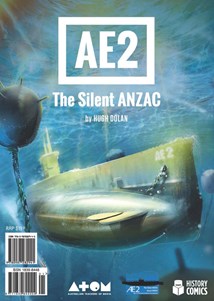 An interesting volume, which tells the story of AE2 in cartoon form – perfect for schools. The detail is occasionally overwhelming, but both books make an important addition to the understanding of the naval war.