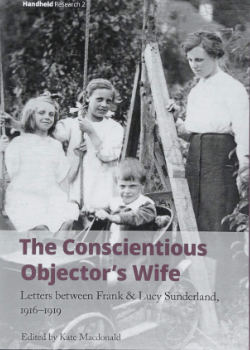 In The Conscientious Objector’s Wife, the working–class Sunderland family were fervent pacifists, supporters of the Labour Party and the Garden City movement devised at the end of the nineteenth century, largely by Quaker and pacifist idealists. The couple moved Letchworth in the early 1900s and their wartime letters – mundane in the sense that they do not touch on the major issues of the time – were rationed and strictly censored. Mundane they may have been but their strength lies in revealing the minutiae of living through the hardships of war; earning a living, coping with illness and maintaining their social meaning of life.

Frank Sutherland, in his thirties, seems to have been largely ‘respected’ in his views and it seems was spared the worst of imprisonment as an objector. Living in a very pacifist community, Lucy too was not subject to the approbation that widows had in ‘ordinary’ life. Nevertheless, survival was not easy for her and their three children. They suffered poverty and illness throughout the war and although Frank survived the ordeal and came home in 1919, they did not have an easy life thereafter.