The Emperors: How Europe’s Rulers were destroyed by The First World War 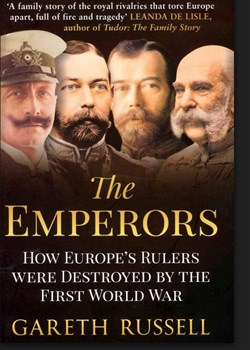 To understand how the First World War came about, it is necessary to understand the way in which regimes in the main empires involved operated. This is Gareth Russell’s first non-fiction work. It tells concisely about court protocols and the respective administrations in the three autocratic monarchies involved; Germany, Austria and Russia. (Although I am not entirely why George V  is a pictured on the cover, sine, he is more or less a supporting act - Great Britain being a constitutional monarchy, with the king having very little real power.)

On reading, it becomes abundantly clear that the German. Russian and Austro Hungarian autocrats had not recognised how mass industrialisation, urbanisation and  workers’ attitudes, swapping  agricultural life for the cities and demanding rights, had any a real clue (nor cared, particularly) about the impact of changes. By the dawn of the 20th century, unlike their forbears they no longer needed to demonstrate the strength that made a competent  military commander, the reason why their forbears were made kings. They lacked competence, diplomatic ability and sound judgement. Both Wilhelm and Nicholas were both touch with the realities of a fast changing world.