The German Offensives of 1918 by Martin Kitchen 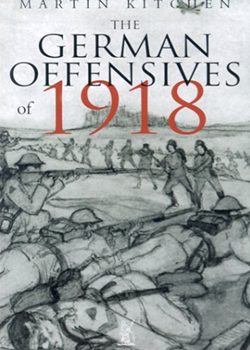 [This review first appear in the April 2002 edition of Stand To! No. 64. This review and the entire archive of Stand To are available to members via thier Member Login].

Publishers have recently shown two welcome trends in writing about the Western Front. Because of the poignancy and drama we have long known a great deal about 1914-17 but 1918 has suffered some neglect, despite the early close shaves for the Western Allies and their eventual victory. There have also been more investigations into German sources by researchers with both the intent and the skills needed to look at the other side of no man's land. Martin Kitchen's book embodies both developments highly effectively.

The author holds a professorship in Canada and has established a reputation as a leading expert on German military in the late 19th and early 20th centuries. This book is part of a series on 'Battles and Campaigns' from Tempus, including 'Gallipoli 1915' by Tim Travers.

The author's main focus is the strategic planning by Ludendorff and the German High Command, but he also provides plenty of insight into what Foch and Petain, as well as Haig, were doing.

After analysing what both sides felt they had achieved in 1917 and how they were planning to adjust to the Russian withdrawal and the American arrival, the book follows a narrative path. There are dedicated chapters on Operation Michael and each subsequent German attempt to achieve the final breakthrough. Kitchen ends with a brief account of the start of the '100 Days' Allied campaign to victory.

Throughout the author develops his central thesis of the successive failures of the German commanders, especially Ludendorff and the deterioration of the Germans in the field. With his attention constantly diverted by politics, Ludendorff succumbed to his recurring conviction - despite mounting evidence to the contrary, much of it provided by his own side - that just one more German offensive would at last deliver the decisive blow. This led him fatally to plan (and meddle) more and more at a tactical rather than a strategic level, losing sight of Germany's overall objectives.

These conclusions are based upon a very comprehensive study of the German archives; the book is detailed and scholarly but it has much of interest to anyone wishing to discover more about just how close the Allies came to losing that spring. It thus seems a shame to mention a few minor but irritating defects. The maps and the index are rather superficial. (Haig gets twenty-nine pages in the index but with no further clue as to context.) The proof reading has gone astray in places; for example, Chapter 7 has been given the wrong title page and page headers. In contrast the illustrations, notes and Bibliography are detailed and helpful, especially to readers of German.

It is a book which deserves to be widely read and to appear in paperback in due course.