The German Offensives of 1918: The Last Desperate Gamble by Ian Passingham 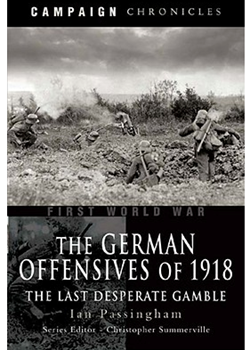 Whilst Ian Passingham’s account of the German Spring Offensives of 1918 has enjoyed some harsh judgment on the Great War Forum, it would be a great mistake to over-egg the critical pudding.

Equally, despite the publisher’s overstated blurb claiming that the book is controversial, it did not seem truly so to this reviewer. That is no genuine complaint, for the author’s views seem pretty much in line with current thinking on the German Spring Offensives in which its army’s tactics – themselves by no means new - were totally subordinated to any strategic calculation by Ludendorff.

Ian Passingham does however, as claimed, offer worthwhile eye witness accounts, a valuable outline of Ludendorff’s flawed mind and reveal German and Allied high command thinking. Whilst Martin’s Kitchen’s approach is far more comprehensive, more dense and ‘academic’, this new work’s lighter approach provides a very helpful reference – a ready reckoner if you will - and a very worthwhile introduction to the battles which finally led to the German Army’s defeat in the field; if a little overpriced.