The Great War: Myth and Memory by Dan Todman 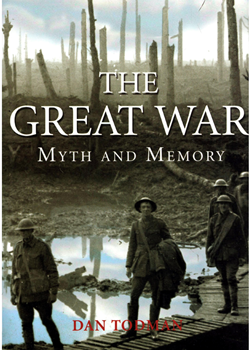 The Great War: Myth and Memory is  based on Dan Todman’s PhD thesis and looks at the changing perceptions of the Great War from 1918 until the present day.

Chapter three on 'Donkeys' is particularly illuminating. The author concentrates on the changing reputation of Field Marshal Haig, who after 1918 was seen in a fairly positive light, largely due to his work with the British Legion which culminated in an outpouring of public grief at his funeral in 1928. However, the author charts Haig's reputation after that through novels such as C. S. Forester's The General, the memoirs of Lloyd George and Winston Churchill and the numerous writings of Basil Liddell Hart.

Great War Generals are also put into the context of the Second World War where generals were much more media conscious. Haig's reputation was associated with David Low's cartoon character Colonel Blimp which was given a wider audience with the film The Life and Death of Colonel Blimp (1943).

The author then considers the 1960s with the Alan Clark's The Donkeys, the stage and film production of Oh What a Lovely War, and the BBC television series The Great War. Through this medium as the author contends: 'It was in the twenty years after the 1960s that the representation of its generals as donkeys became so dominant that it stopped being disputed'. This is shown by the public enjoyment of television series such as The Monocled Mutineer (1986) and Blackadder Goes Forth and epitomised in 1996 with the reaction to the well researched and balanced Timewatch documentary Douglas Haig: The Unknown Soldier which led to hate mail being received by the one of the military historians defending Haig's reputation.

The reasons given for this vilification of Haig and his generals are that they are blamed for the huge casualty figures of the Great War and a continuation of the 'caricature of incompetent officers [that] already existed in popular culture'. Secondly, he comments that the myth remained useful and was reinforced through repetition and finally as the years went on fewer veterans were around to debate the issues so this myth became the dominant one

The next chapter deals with futility, which has become a word synonymous with the Great War, particularly in a literary context. The author shows in historical terms that the war was certainly not futile and was not seen as such by the participants or their relatives up to the Second World War. Again, it was in the 1950s and 1960s that this became a more prevalent view with the publication of some of the above works and the background of the Cold War, until it was taken for granted in the 1990s. The idea of the futility of the Great War is usually epitomised in the national consciousness by the poets and Wilfred Owen in particular. As many commentators have pointed out, Owen was almost unknown at the time of the war and for many years afterwards. The author charts the popularity of Owen which began with the publication of a collection of his poems in 1931 edited by Edmund Blunden, an English professor who championed Owen's poetry to his students and the wider literary world. Works such as Paul Fussell's The Great War and Modern Memory helped continue these myths which the author rightly describes as 'a work of polemic rather than analysis and has to be treated as such'. For as the author contends 'Owen was, and is, a poet for non-combatants'. The book is full of similar interesting insights, and I thoroughly recommend this fascinating work by a military historian who looks at the historiography of the Great War with the added dimension of its cultural history since 1918.

(This review first appeared in Stand To! No.79 April 2007. The journal of The Western Front Association is published three times a year with the archvie of some 115+ editions available to members via their Member Login.)