The Somme 1916: Touring the French Sector 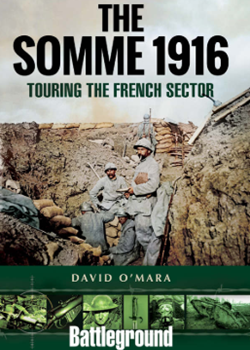 ‘Oh, No! Not another book on the Somme!’ Not my words but those of the author.

David O'Mara makes it clear that his book is different – and without doubt he succeeds. This is an essential read for those who study the Somme. The French sector on the Somme is one of the most neglected; indeed the British Army called it the Battle of the Ancre until 1928, as it – unlike the French Army which actually straddled the river – was some distance from the Somme during the entire battle. Between July and December 1916 the French, despite battling on the Verdun sector, committed roughly the same number of men to the battle as deployed by Haig in the British sector. The first 100 pages cover the background to the French Army, their role in the sector between 1914 and 1916 and the successes and failures of July to December 1916. One perspective of the French role is that its daily rate of ‘attrition’ was just under 200 more than that suffered at Verdun.

The author’s research is exemplary.

David's writing makes understanding the events comprehensible and straight forward. Maps are plentiful and well sourced images support the text. While most P&S Battleground books have tours as an appendix, this dedicates more than half its length in outlining three major routes  covering, chronologically, the northern and southern French sectors.

Well researched, the tours include much of interest – from the ‘big picture’ to the individual graves of Frenchmen. I suspect most Western Front Association members will have extensive libraries on major battles of the Great War including many ‘standard’ texts on the Somme. This highly readable work adds greatly to our knowledge of a much–neglected aspect of one of the great battles of the war. It should also inspire readers to venture further south when they next travel to the Somme – with luck they may even get to see the river that gave its name to the battle! Review by Andy Thompson