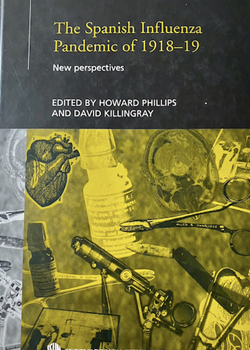 There is so much to learn from ‘The Spanish Influenza Pandemic of 1918-1919’.  A comparative history will be written in due course comparing the pandemic of 1918-19 and that of 2019-2021. Writing in 1998, ‘What occurred in 1918-19, we are repeatedly told by virologists and epidemiologists, is likely to happen again. Influenza at some time will return in a virulent form … and spread globally within a few hours’. (p.11) But was anyone listening?

We learn that 95% of the world’s population survived the 1918-1919 pandemic - so ‘only’ 30 million or so died, compared to the current figure of 4.6 million (11 Sept 2021). We learn that in 1918-19 the ‘virus took advantage of crowds of men as the war in western europe came to an end’ - this time round the virus found crowds in the highly urbanised concentrations of people, travelling far faster by air than it ever could by boat. What took weeks, even months to spread around the world in 1918-19 has taken days over later 2019 through 2021.

There are so many stories and insights - especially as little was published about the pandemic after 1922.

This is a global work

There are insights of the impact of the 1918-1919 pandemic on Africa: through Algeria, Angola, Benin … Chad, Congo, Egypt, Kenya, Morocco, Nigeria, South Africa, Zimbabwe. Through the Americas: Argentina, Canada to the US and Asia: China, India and Japan, as well as Europe: Albania to Croatia, France, Germany and Greece, to Ireland, Norway, Spain and the UK and Oceania: Australia, NZ and Samoa.

It gives global coverage to a global event. For example, death rates in the far north of Canada and Tanzania had a great deal to do with the severe pressure put on a communities ability to survive - in Canada in winter to keep fires burning and provide food and water, in Tanzania, in contrast because planting and weeding was disrupted, and the conflagration between Germany and Britain exacerbated the situation considerably.

We learn that the mask worn by people with a cold or feeling unwell in Japan almost certainly has its origins from 1918. We learn that the medical profession struggled and that national approaches varied. Where communities had had no exposure to previous outbreaks the mortality rate could by 70% or higher.

I question the idea of following Croce’s maxim (mentioned in the text) that ‘all history is contemporary history’ (p.19) i.e. we only care if it has some relevance to us today. That may be the popular publishers’ and broadcasters’ view, who care only about book sales and ‘eyeballs’, but it is not the case with an academic work such as this - though more popular interest 20 years ago may have meant that  that these lessons and insights would have been picked up and applied rather than simply waiting for the next pandemic ill-prepared.

We learn too why there has been comparatively little interest in the Spanish Flu Pandemic of 1918-19 - its impacts, disease, disruption and deaths, that people ‘stoically accepted’ it ad a time when life was shorter and more tenuous, and that despite the scale of its impact, it was ‘overshadowed by the war’.

We also learn that the medical profession neither understood what they were dealing with - a bacillus or a ‘fiter-passing’ virus - and so didn’t know how to tackle it, but that medicine itself was more interested in surgical intervention and chronic conditions than infectious diseases. And that many doctors would not where masks for fear of looking stupid or making their patients anxious.

‘The Spanish Influenza Pandemic of 1918-1919’ is organised around six main themes:

The ‘Spanish Flu’ - was so dubbed inaccurately by the non-Spanish European press at the time - the single worst demographic disaster of the 20th century. (p.3) We know that the origins of the 1918-1919 pandemic were never Spain; we know that control on news had first reports coming from the press in Spain. The 1918-1919 pandemic began in the America Midwest then spread to Europe via troop ships into Brest.

The origins of Spanish Flu

The origin of ‘Spanish Flu’ was the US MidWest in early March 1918 - it then swept around the world.

The first wave that travelled through Western Europe, to Asia and North Africa and then Australia was not highly lethal.

It then mutated the second wave that was unleashed around 15 August 1918 that was highly lethal. It attacked men ages 20-40 in particular. It engulfed the world in a few weeks (p.5) It travelled quickly via steamship, in particular the HMS Mantua from Freetown, US which docked in Brest 22 August 1918 with 200 sick on board - and then onwards via railways. Its movement was further facilitated by the mass movement of men and materials to and from military encampments finding ideal conditions for transmission where there were dense concentrations of people.

Influenza pandemics we learn have tended to come round every 11 to 39 years:

This author asked, ‘will there be another?’ (p.37) and of course -  there now has been, going on to ask if it the virus would as virulent as the agent of 1918 - it has been, and would be be about to control it - it rather looks as if we have, to a degree, after all, 4.5million have died to date rather than the 30 million or more of 100 years ago.

Chapter 2 : The risk of future influenza pandemics is thought to be high.

The common practice of wearing a mask when you have the flu or a cold in Japan probably originates from 1918. (p.18)

High exposure to the first wave probably afforded some immunity. Not so in South Africa, India or Polynesia.

100+ years ago New Zealand kept her ports open to people and trade, not so a hundred years on. There’s no world war but our transport routes and therefore ease of transmission is greatly enhanced. Rather than fit young adults this time round the pandemic has gone for the elderly. Viruses were barely understood 100 years ago, whereas this time science created vaccines rapidly, though distribution still puts wealthier nations ahead of others.

1.2% died compared to 34% who died in an outbreak of bubonic plague 20 years earlier.

First outbreak was a soldier who travelled from Melbourne 28 January 1919. First death a railway worked 20 February 1919 at the coastal hospital (p.127)

The medical profession was unsure what it was battling - a bacillus or a ‘fiter-passing’ virus … and could not agree on how to combat the disease. The medical profession had neglected infectious disease and accorded it lesser importance than surgery or chronic conditions (83) The Times, 24 December 1918

Within the healthcare system at the time, the view was one of desperation, extreme fatigue and unpreparedness. (p.154)

A rather novel defense was proposed by Sidney H. Birkbeck and Frank A. Dyton who stole a commercial motor car … due to the effect of influenza. The magistrate remarked that it seemed rather a serious development of the disease. See The Times, 12 November 1918 (p.5)

Chapter 10 : Variations in death tolls within and between communities

The return of troops during WWI first by troop ships from Europe to Canada’s east coast, then by trains westward across the country … along trade and transportation routes taking a month to reach the far north (p.156) Canadian Historical Association. The pandemic travelled at the speed of available transport and depended somewhat on the ecology and social organisation. Survival was also based on access to food, water and wood for fires (p.171)

There is nothing ‘Spanish’ about Spanish Flu

A case of ‘false accreditation’  … rather it appears to have sprung from the US in March 1918.

Increase in deaths related to poverty, malnutrition, an unhealthy environment and disease (p.187)

From the US with the AEF in April 1918 into Brest, whether or not a town took precautions (Lyon did, Marseilles did not) the death rates were the same.

Masks were not used by doctors for fear of ridicule or making patients anxious. (p.195)

The transport infrastructure helped to ‘virally equalise’ all categories, civilian and military, and all geographical areas (p.200)

Brought in by Brazilian sailors.

Bubonic plague had a larger impact than crop failure.

E.Le Roy Ladurie : ‘The Mind and Method of the Historian'. Brighton (Harvester) 1981

Richard Hugheson Collier : ‘The Plague of the Spanish Lady’ (1974)