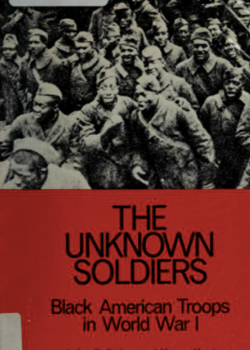 ‘The Unknown Soldiers’ is essential reading if you are interested in understanding how African-American soldiers served and were treated during the First World War as part of the American Army. The foreword is blunt about the authors revealing ‘the sordid realities of the racist, debasing indignities committed against the black soldier’. There was flagrant discrimination at every stage of the process, from recruitment through training (four days drilling and a haircut), service, recognition and how they were received and treated on their return - what the authors refer to as the ‘hydra-headed racism’.

The problem identified is that after the war the first books to be published tended to take a placating view and lacked efforts to be scrutinised preferring to gloss over the reality, either to soothe the views of their publishing masters or to steer away from fueling violence. As the authors wrote, ‘Black or Negro (sic) combat soldiers and labour corps tended to do little more than cover the events, detail heroic exploits, quote what little praise that could be found from military communications and provide biased opinion.’

‘The Unknown Soldiers’ is one of the first academic studies (1974) which lays out in exacting detail the plight and experience of African-Americans who volunteered or were conscripted and then served on the Western Front - or more likely in labouring details unloading ships, laying roads or pulling up the dead for burial. It is not a pretty story.

"The ‘Negro Problem’ was a creation of the army - through draft policies, assignment, training and leadership … all based on racist presupposition." (p.XV)

It is fair to criticise Woodrow Wilson for contributing to the modus operandi of ‘keeping African-Americans ‘in their place’ and were denied education or the law on their side. As Kelly Miller, Howard University Professor, wrote Wilson ‘believed in democracy for humanity, but not for Mississippi’. (Miller, 1924 p.10)

It was the hope, desire and expectation amongst African-Americans agitating for change that the war was ‘an End, and also a Beginning. Never again will darker people of the world occupy just the place they have before’. W.E.B. DuBois (p.20)

Yet African Americans believed the words of Woodrow Wilson that the war was ‘to make the world safe for democracy’ and they showed their loyalty to the flag by buying Liberty Bonds and enlisting. There was a history of serving, indeed African-Americans had served in the Civil War, and the Spanish American War.

It was always intended, though it was not made clear to recruits, that Black Regulars would remain in the US, Black National guards who fight in France while Black Civilians as laborers’ (p.33)

Once in France they suffered a ‘catalogue of misrepresentation grossly prejudicial reporting saying anything to represent the black soldier as a coward and the idea of failure’.

We know that General Ballou of the 92nd ‘detested Negroes’ (sic) and the white General Bullard who led them. African-American soldiers received poor training, were poorly briefing, lacked equipment and once the war was done it was 6,000 African American of the SOS who were sent to Romagne to collect and reburry 23,000 so that ‘all the detritus of war had to be cleaned up in time for the French farmers to plant their fields in spring of 1919.’

Returning to the US without taking part in parades that summer in Paris and London, African-American soldiers still in uniform, often all they had to wear, were driven out of town in Texas, Mississippi, Alabama, South Carolina, Kentucky and Wyoming. Lynchings increased and took on a gross and violent tone, with 11 burned alive out of 83 lynchings in 1919. In Britain there were race-riots in Liverpool, Glamorgan, Berry and Cardiff.

The authors find it hard to control their understandable anger, writing that 'There seemed no bottom to the depravity of the lynchings; it strains belief that Americans … could enjoy perversion rivaling the circuses of decadent Rome!’ and go on to say that it was hardly surprising that the ‘New Negro’ (sic) developed a ‘spirit of defiance born of desperation.’ (p.187) coming out of the war. They faced considerable hostility on their return.

The hopes of African-Americans had been modest; they had hoped for the opportunity to vote, to find work, to get their children into school and to have a little spare cash at the end of the month. A world war was not going to help with this, indeed, the economic crisis that followed saw white supremacists perceiving that the ills of the world were down to the ‘black problem’.  From 1919 there would be 50, 60 or more years, even to the present day, the fight against discrimination against the African-American population goes on.

Across The Western Front Association website you will find articles and reviews on the African-American experience in the First World War and of Black British and Black French troops who served as labourers or combat soldiers in their respective armies. Their fates and the ideas they took back to their respective countries after the war defined much of the rest of the 20th century in relation to white supremacy in North American and colonialism around the world.

'The Unknown Soldiers' by two consummate historians, is thoroughly referenced and a worthwhile starting point. Second hand and library editions of this highly recommended book are available.