The Virago Book of Women & the Great War 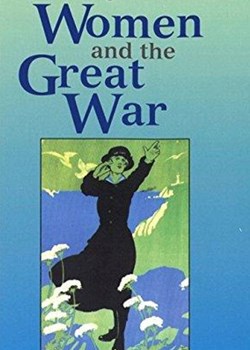 I was gratified to see that this collection of women's experiences of the Great War opens with an extract from Beatrice Kelsey's journal which was first published in Stand To! 44. Following this are extracts from the memoirs, journals and letters of dozens of women, many of whose names are well-known to us, such as Vera Brittain, Millicent Fawcett and Beatrice Webb. But many others are published here for the first time, or for the first time since their original published version went out of print. These less accessible writers provide, for me, the real value of this collection - women such as Sarah Macnaughton, who worked first in Belgium and subsequently went out to Armenia, from where she commented upon the 'Armenian Massacres' (a neglected subject, I feel, which may one day be properly researched and written up). She describes the slaughter of the Armenians, but then comments: 'The Armenians are hated. I wonder Christ doesn't do more for them considering they were the first nation in the world to embrace Christianity; but then, one wonders about so many things during this war'. Yes ,indeed.

The one difficulty I have with this anthology is that it is difficult to find one's way about it. The sections are listed simply by year; nor is there any way of finding individuals by name or by topic, as there is no index. However, there is a useful biographical paragraph about each contributor, except for a small number for whom there is 'No Information'. Some of these are represented by their diaries which have been deposited in archives such as the IWM, but apparently with no attached details as to their provenance - a great pity. But this is a useful book, indicating as it does in just how many odd comers of the war women may be found to have wielded influence.

[This review first appeared in the journal of The Western Front Association Stand To! Issue 55 April 1999. This and other copies of Stand To! are available to read online to members by signing in using their Member Login]