The Zeppelins: An Illustrated History by Phil Carradice 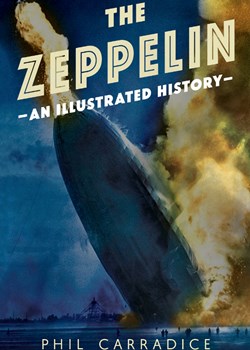 This does exactly what it says in the title. It offers a concise history of the development of the Zeppelin airship from its inception, carrying passengers and as an unwieldy weapon of war. Graf Ferdinand von Zeppelin, a Prussian career soldier and an observer in the American Civil War, had seen the advantages of balloons for observation.

An intelligent and resourceful man, with a fortune to devote to his beliefs, once retired, he concentrated his efforts on development of the airships that took his name. After a few false starts and accidents, Germany’s high command, convinced that war was inevitable, became certain that Zeppelins were the way ahead for aerial warfare.

The book shows how the Kaiser’s generals were soon disabused of this, for, although silent, these giants were too slow and at night, if caught in searchlights, met with disaster. By 1917, even Graf Zeppelin himself knew that only fixed wing aircraft had a future in warfare.

Post war, airships had a reasonably successful career in luxurious passenger travel - until the disasters of the R101 and the Hindenburg.