The Zimmermann Telegram : Intelligence, Diplomacy and America’s Entry into World War I by Thomas Boghardt 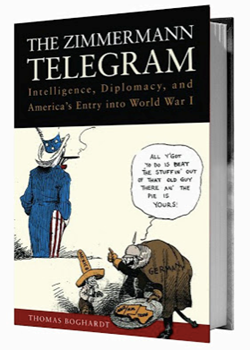 In a well‒documented and closely argued text, the author draws on documents not available at the time Barbara Tuchman’s classic work was written in 1957 and takes a fresh look at the Zimmermann fiasco. Boghardt expertly dissects the political and military situation surrounding the decryption and dissemination of the notorious Zimmermann Telegram which triggered (but was not the cause) of America’s entry into The Great War. Of equal importance are his brief, but revealing character sketches of the principal actors in the drama: German Foreign Secretary Arthur Zimmermann, British naval intelligence chief, William ‘Blinker’ Hall, Wilson confidant Colonel Edward House and US Secretary of State Robert Lansing among many other major and minor characters who played key roles in the drama.

The disastrous decision to dispatch the telegram was taken by Foreign Secretary Zimmerman without reference to the German Chancellor, the Kaiser or the German general staff. Zimmerman’s action was typical of the dysfunctional German federation which lacked a central policy‒making body or individual. Moreover the Foreign Ministry failed to investigate carefully the circumstances surrounding disclosure of the telegram. Zimmerman preferred to scapegoat German ambassador Henrich von Bernstorrf and the German embassy staff in Washington rather than admit to a rather obvious breakdown in cryptographic security. Thus, this leak was never sealed. Unlikely as it seems, Zimmermann, an experienced diplomat, and his staff were woefully ignorant of political forces at work in America, Mexico and Japan. Thus, these abortive German efforts to get Japan (a British ally) and Mexico (then in the throes of a civil war) to attack the United States had no chance of success.

For his part, US Secretary of State Robert Lansing effectively covered up the true provenance of the Zimmerman decryption. Like Wilson’s diplomatic confidant and emissary Colonel House, he favoured American entry into the Great War on the side of Great Britain and saw Zimmermann’s rash and ill‒informed gambit as decisive in this regard. In fact, however, the telegram only served to further polarize factions of American pacifists and interventionists. Despite the Zimmermann provocation US public opinion remained sharply divided on the subject of belligerency. Wilson knew this and took extraordinary measures to excite war fever and crush anti‒war sentiment. In addition to sanctioning super‒patriotic leagues like the National Security League and the American Defense Society, the Post Office Department suppressed anti‒war and pacifist publications and the Attorney prosecuted and jailed anti‒war activists such as socialist labour leader Eugene Debs. Wilson also hired publicist George Creel to head up the Committee on Public Information, the official administration propaganda outlet which churned out millions of pages of news print and sponsored hundreds of speakers in support of US participation in the conflict.

Finally, the author uses the role of British naval intelligence in interception, decryption and disclosure of the Zimmerman to highlight the growth of powerful intelligence services engendered by total war and largely independent of responsible political control. British naval intelligence chief ‘Blinker’ Hall took it upon himself to leak the telegram to the Americans without reference to the War Cabinet or Foreign Office. The growth of MI5 and other powerful and free‒wheeling intelligence services patterned on Hall’s successful spy enterprise (and its famous Room 40) survived into the post‒war period and flourish on both sides of the Atlantic today.