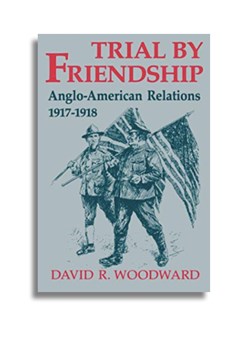 [This review first appeared in Stand To! No.43 April 1995. Members of The Western Front Association receive our journal Stand To!, three times a year and have access to the full archive online].

Anglo-American relations at the time when the United States entered the Great War have been somewhat neglected by British historians. This well-researched book describes with clarity the attitudes that existed between the governments of the two countries, and President Wilson's unilateral approach to peacemaking. The final months of the war, in which general Pershing had hoped to predominate, ended up with Haig's impressive achievements, making the AEF's role in finishing the war modest by comparison. Consequently, no American was invited to the signing of the surrender document in that railway carriage at Compiegne. The author tells us that were it not for:

the unexpected achievements of British arms during the last hundred days of the war, the United States would have eventually achieved the military dominance over Britain that it already enjoyed in the economic realm. Whether Wilson’s revolutionary diplomacy in that event would have succeeded in creating a more stable world remains an argument without end.

We are reminded that in the final offensive Haig was supported by only two American divisions, which he had to withdraw on 20 October when Pershing refused to replace the 13,182 American casualties. Later he refused to add a further two divisions. The American First Army fought between the Meuse and the Argonne Forest, but its logistics were in a mess. A comprehensive summary of the American part in the final offensive and the peace negotiations make this fine book essential reading for an understanding of what happened at the end of the war.