When the Navy Took to the Air: The Experimental Seaplane Stations of the Royal Naval Air Service 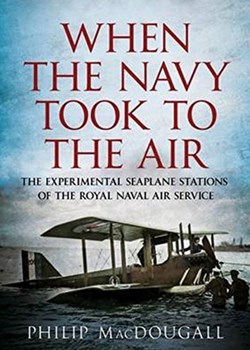 Those hoping to read of the exploits of the RNAS on the Western Front will be disappointed since the secondary title of this volume provides a better description of the contents than the primary. While there is some description of aerial action, it reflects only on the culmination of research and experimentation at places such as the Isle of Grain, and Eastchurch.

As well as floatplanes, flying boats, and experiments in launching and recovering landplanes at sea, this work encompasses rigid and non-rigid airships. It also two appendices. The first describes what events at the various location post-war (following the disbandment of the RNAS) and what remains now exist. The second lists experimental projects carried out at the Isle of Grain between 1913 and 1924, with their TNA references.

What is clear is that the RNAS was innovative in developing new technology and in thinking of new offensive uses for aircraft and airships. It was however hamstrung by being a much lower priority for funding and new equipment (particularly more powerful aero-engines) than the Royal Flying Corps on the Western Front, unless a response was urgently needed to meet some new threat, such as the Zeppelin raids. In consequence, many floatplanes and flying boats were underpowered and had considerably difficulty carrying out the roles for which they were intended.

There were, however, successes. Major developments were achieved in navigating over water, hunting U-boats, and in convoy protection. Although only two successful aerial torpedo attacks were carried out during the Great War (both against Turkish transport ships) they undoubtedly paved the way for successes at Taranto and against the Bismarck in the later conflict.

Although the author knows his subject, there are a few minor errors. The author describes “… a visit to Germany in June 1912 by two Naval officers, Murray Sueter (the future Director of the Air Department of the Admiralty) and Mervyn O’Gorman”.  In fact, O’Gorman, was not naval officer, but Superintendent of the Royal Balloon Factory (later the Royal Aircraft Factory) from 1909 until 1916, and thus highly qualified to study German airship development.

That apart, When the Navy Took to the Air casts a new light on the development of naval aviation during the Great War, and will be a useful addition to the bookshelves of interested readers. 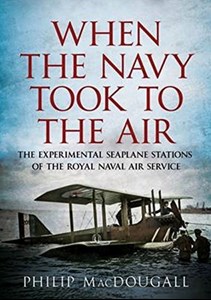 When the Navy Took to the Air: The Experimental Seaplane Stations of the Royal Naval Air Service by Philip Macdougall