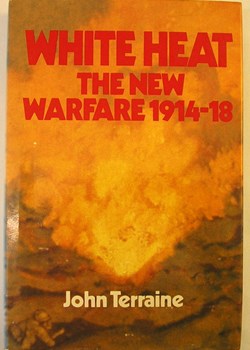 The appearance of a new book from our President is always an exciting event and the publications of White Heat is no exception. This volume is his tenth on the subject of the First World War and in it he concentrates on the technological aspects of the conflict.

Mr. Terraine contents that 1914 saw a confluence of technological innovation and industrial capacity and on this mixture the war acted as a catalyst to produce the “white heat: of rapid change in the nature of warfare. He sets about attempting to prove his thesis with an impressively organised text (reminiscent of his The Road to Passchendaele) and some 100 photographs. However, by demonstrating so clearly that all the technological advances seen during the war had their roos deep in the innovation and productive capacity of the late nineteenth century he proves no more than the truth of the aphorism “war is the locomotive of civilisation”. Between 1914 and 1918 the locomotive ‘Great War” pulled the train ‘Western Civilisation’ rather haltingly into the twentieth century. The fire beneath the boiler may have reached a satisfying cherry red, but it certainly didn’t burn to white heat. For example, on the British side, even the creation of the Ministry of Munitions (in itself an innovative move) did surprisingly little to inject a sense of urgency into the development and manufacture of new weapons or improvements to old ones.

Nevertheless, White Heat is undoubtedly a valuable survey of the effect of some technological advances (or lack of them) on the course of the war and happily Mr. Terraine makes telling points on virtually every page. Of particular importance are those relating to the nature of battlefield communications and their effect on the degree of control that generals could exercise over the course of the battle. He states “even such a fire-eating commander as General Charles Mangin had to accept that during a battle, if he left his headquarters and ‘went marching about the font line, I would be commanding no more than one or two companies’”.

I firmly believe that this fascinating text would have been enhanced by greater detailed concentration on some of the innovative techniques and novel weapons that only receive a passing mention. Certainly it would have benefited greatly from a more imaginative choice of photographs, though I suppose that it might be argued that the use of a publicity still from Hell’s Angels as end-paper illustrations showed imagination enough.

[This review appears in Stand To! No.5 Summer 1982 with several other reviews, a number of veteran 'eye-witness' accounts and other articles on Lochnagar Crater, Armoured Cars, the Battle of Loos and Bomb Disposal on the Home Front. Archived copies of Stand To! can be accessed by WFA members].