‘Wisht Lads: Washington in the Great War by Peter Welsh 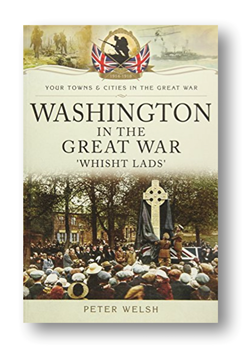 [This review by Peter Hart first appears in Issue 103 of Stand To! The Journal of The Western Front Association which is published three times a year. Members receive this and Bulletin, as well as gaining access to the entire archive of Stand To!, Gun Fire and Free access to our digitised Pension Records on Ancestry’s Fold3].

This well illustrated book is a tribute to the men of the County Durham villages of Washington, Harraton and Usworth villages who fought in the Great War. It reflects how this small community was thrust from peacefully celebrating the Durham Miners’ Gala on 31 July 1914, to facing up to a global war just a few days later. War seeped into life everywhere. The shops struggled with initial panic buying then struggled as best they could to carry on as usual, before real food shortages caused increasing restrictions, concerns about profiteering and very real hardship amongst the community. Spy panics and fears of the ‘aliens within’ waxed and waned, depending on events. Advertising soon reflected the concerns sharpened by war, including life insurance and bullet– proof vests! An imaginative chapter looks at the life of women and children, initially by the device of a kid asking her mum, ‘What did you do in the war, Mammy?’ The answer was plenty: not only looking after the home in difficult circumstances, but gradually taking up the slack in the absent male workforce, or working in the dangerous munitions factories. Everything was changed by war.

Recruitment was an immediate fixation. Men were urged to flock to the colours – particularly the local Durham Light Infantry and the Northumberland Fusiliers – by a combination of patriotic exhortation, insults and insidious peer–group pressure. Men working in the grim, dangerous environment of the local coal mines may well have seen the war as a chance for adventure, a break from reality. Right from the start we are warned that those men whose names are printed in bold in the text would not return. In 1916 conscription removed the element of choice and we began to hear of the tribunals which decided on exemptions or the fate of conscientious objectors. There was little sympathy or understanding displayed: this was a community at war.

The backgrounds of many of the fatal casualties with the circumstances of their deaths are recorded where possible, but the book is not maudlin, they are not treated as ‘plaster saints’ and their stories contain many flashes of wry humour to alleviate the gloom. Another chapter looks at the men who were awarded medals for gallantry. In following the soldiers we get glimpses of the fronts and campaigns in which they fought and far too often died, including the Western Front, Jutland and Gallipoli. We also see how their deaths affected the families they left behind. The end of the war brought some celebrations, but many still mourned their dead – amongst them 131 widows and 226 children who had lost their fathers. The war memorials would prove to be a public expression of much private grief.

Washington was not a great city, an industrial centre, or a great port. It was unimportant in itself, indeed few of us would know where it was on the map. But this book has the light touch essential to make one interested in this one small community and how it responded to Armageddon. The men who fought and died are not forgotten and the book’s author as part of the UA3 War Memorials Group has been greatly involved in a project to try to place a bronze resin poppy on the home of every fatal casualty from the villages, events have been organised and a professionally produced DVD Washington Men in the Great War – ‘Wad thou gan? Aye, Aa wad! has been made in commemoration. Wisht Lads is just one part of a very interesting attempt to link a community with its own past. We may not all understand the nuances of the Durham dialect, but I certainly wish them every success!