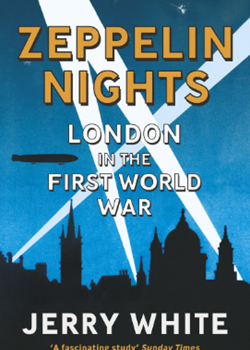 There can be no one better qualified than Jerry White to write a 'biography' of London during the First World War. A former Chief Executive of Hackney Council he has written half a dozen books about the capital including a trilogy charting the history of the modern city from 1700 to 2000. 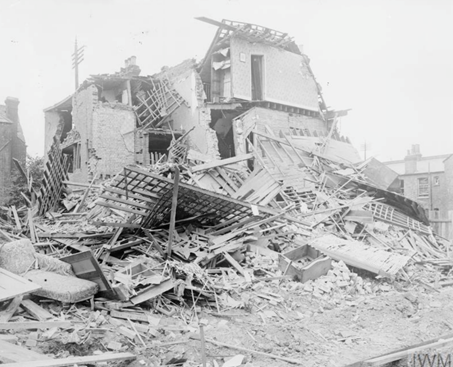 He makes use of a wide range of both primary and secondary sources and is particularly indebted to former Times journalist Michael Donagh's In London During the Great War a lively and informative account that surely merits a reprint of its own.

The title of the book comes from a fantasy novel written during the war by Violet Hunt and Ford Maddox Ford and the fear and reality of air raids features prominently. It seems extraordinary to us that until mid-1917 the government refused to allow any warning of air raids to be given as they thought they would cause unnecessary panic. The government's main advisor on this was Metropolitan Police Commissioner Sir Edward Henry, one of the least distinguished people to have fulfilled this role and whose ineptitude prompted his own force to strike in 1918 leading to his own resignation. The final death toll in air raids was 668 a figure that paled into insignificance compared with the 30,000 in World War Two but also with the autumn of 1918 when more than 1,000 Londoners a week were succumbing to the 'Spanish Flu'.

White is exemplary in documenting the social, political and economic changes that four years of war brought to London and the book is peppered with fascinating titbits such as the fact that cinema attendances tripled during the war and that its manufacturing economy moved westwards. His conclusions are that the war was something of a watershed if not, in Arthur Marwick's phrase, a 'deluge'. It changed the lives of millions of Londoners: women who no longer saw domestic service as their only choice of work; paupers for whom a more enlightened poor-law authority rejected the workhouse and workers who joined trades unions and the Labour Party.

One of the most obvious changes was the influx of women into jobs previously the sole preserve of men. The South Metropolitan Gas Company employed 2,000 women with housewives reportedly very pleased with the result as the women were 'neater, quieter and quicker than the men.' Though many such jobs were relinquished with the coming of peace in others, office work in the City for example, these were long-term changes to a feminized work force.

White is unstinting in revealing the less savoury aspects of wartime nationalism such as the morally dubious aspects of DORA (the Defence of the Realm Act) and attacks on German families and businesses which sowed the seeds of racially motivated discontent that lasted through the 1930s to the 1970s and beyond.

But there were many positive impacts as well, brought on chiefly by the dramatic falls in unemployment and short-time working and rises in wages for those at the bottom end of society. 'The Salvation Army night hostels for homeless men and women emptied as if by sorcery' and between 1913 and 1918 the proportion of 'poorly nourished' schoolchildren halved. For those who doubt the link between poverty and crime, the prison population fell by 63 percent. As such White's book is a rebuttal to those who view the war as a disaster for Britain. Nothing can redeem the immense grief at the loss of 750,000 combatants but life on the home front was not entirely grim as, for example, suggested in van Emden and Humphries All Quiet on the Home Front. Though diminishing food supplies caused a rash of queuing the introduction of rationing 'proved an astonishing success' and 'overnight the queues began dramatically to disappear'. As White points out, for many, the war was a time of greater prosperity and 'most munitionettes seem to have had the time of their lives.'

White's careful research also corrects other distortions such as the idea that conscientious objectors were dealt with with maximum hostility and minimum understanding. Instead the picture was far more varied and 'war dissenters received a measured if rarely sympathetic hearing' with efforts made to find alternative employment for all but the 'die hard' absolutists.

There are inevitably a few errors or misconceptions. In drawing attention to the criticism levelled at football for not ceasing league matches and comparing their reaction to that of rugby and hockey he fails to note that the former was a professional sport and the clubs had legally binding contracts with their players in contrast to purely amateur games. White underestimates the numbers of Belgian Refugees by relying solely on contemporary figures and, though the Bill to extended conscription to Ireland was passed in April 1918, it was never enforced.

These are, however, minor quibbles. Overall Zeppelin Nights is an outstanding contribution to the literature of the war and is likely to remain the definitive account of the London of 1914-18 for some considerable time.