The First World War was the first time compulsory military conscription had been introduced in Britain, and Tribunals were set up in 1916 to hear appeals for exemption from the armed services. This was a struggle to recruit men to the armed forces to win the war, but also to establish the moral right of individuals to refuse to fight in a war they believed was fundamentally wrong. 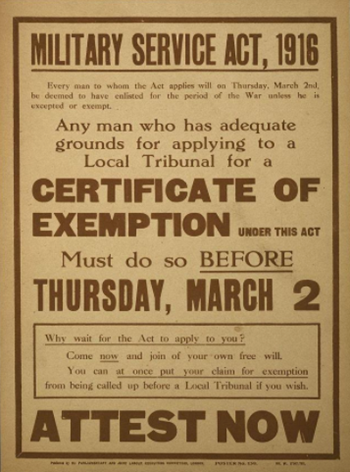 The underlying struggle was to establish the right to objection to military conscription as one that a modern state should respect and observe, with a wartime government that viewed them as ‘the enemy within the gates.’ John Buckell’s talk reveals the struggle between the local tribunals and those citizens of Northampton who refused to fight – and what happened to them as a result.

Milton Keynes Branch members will receive an automatic invite, but all are welcome. Anyone who wishes to attend please send for an invite a few days in advance by emailing Stuart Macfarlan at macfarlan87@gmail.com