ONLINE: “Never Mind the Quality – Feel the Width”: The Role of the Somme Campaign in the Development of BEF Logistics

The 1916 Battle of the Somme was a watershed moment for the British Expeditionary Force, both in terms of the course of the Great War on the Western Front and in public memory and perception. Recent scholarship has attempted to move focus away from history’s obsessive focus on the events of 1 July 1916, in favour of a more balanced and nuanced approach that relies upon dispassionate analysis of the records that attempts to place the decisions of commanders in context. This ‘operational’ approach has led to a much greater, more ‘holistic’ appreciation of the campaign and its place within the overall course of the war.

However, the ‘operational’ approach tends to focus on the actions of commanders, formations, and units; the proper application and balance of command, control, and communication; new offensive technologies such as artillery, machine guns and tanks; the changing structures of tactical units and the advent of ‘All-Arms’ warfare. What is does not focus on is the central and vital role played by the far-less glamorous elements of logistics and engineering, and in an ‘industrial war’ involving masses of men and machines, it is logistics and engineering that define what you can (and cannot) do, as well as when, where, how you can do it.

If the Somme was envisaged as a battle to break through into the ‘green fields and beyond’, then it was doomed long before the first whistles blew on 1 July because it was simply logistically impossible to supply. Indeed, by October 1916 the logistical strain of battle meant the BEF could barely supply the basic needs of the troops as the entire supply chain from port to front collapsed, rendering it unfit for purpose. 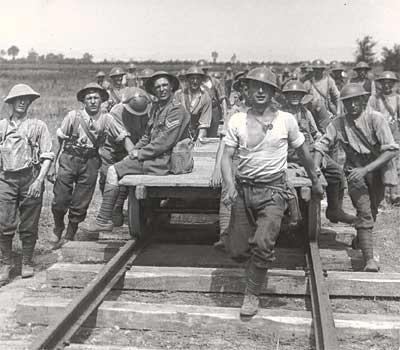 This presentation by Rob Thompson talk aims to provide a logistical and engineering lens through which to understand the battle and the subsequent logistical and engineering developments that took place, developments which, although largely ignored, were the central elements that created an ultimately victorious BEF that could operate an astonishing 60 miles in advance of its supply railheads.

It is also possible to register by clicking this link: Never Mind the Quality – Feel the Width

Please Note : > Once registrations hit capacity (we have a 500 limit on the webinars) then you won't be able to register. If this happens, you can still watch the event via the Facebook Live Stream (subject to any technical hitches) on our Facebook page. Alternatively, these are loaded to our YouTube channel where they can be watched a few weeks after the event.

Your Computer, Your Home
ONLINE: “Never Mind the Quality – Feel the Width”: The Role of the Somme Campaign in the Development of BEF Logistics, office@westernfrontassociation.com