Across from the Parade Ground Soldiers: assessing the French performance at the Somme

The bulk of this article is a long explanation as to the finding of a brief answer: despite suffering slightly under one-third of the Entente’s casualties at the Battle of the Somme, the French inflicted 48% of Germany’s losses.

In Parade Ground Soldiers, the late Dr. Elizabeth Greenhalgh presented a French impression of British efforts of the Somme characterized by brave amateurism resulting in wastefulness. Yet were these impressions valid? The failure of much of British historiography to cover the French portion of the Somme has rendered such a question difficult. The French portion of the Somme in most English language histories is presented like the undercharted territories in early Modern European maps. The latter declared here be dragons, hic sunt dracones, the former hic sunt Francones. The end impression is one of the French being a decidedly secondary, or even minor, presence during the battle. 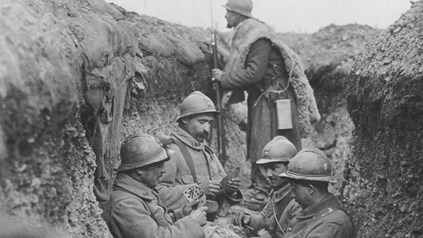 Two annexes from the German Official History of the war should put this view to rest. Found in the back of both Volumes 10 and 11 of the German Official History are lists of all the divisional rotations into, and out of, the line at the Somme battlefield, between July 1st, 1916 and December 10th, 1916. When put together, these annexes give a complete list of not only every German division to fight in the battle, but also, among other things, the sector where they fought and the losses they suffered. Through organising the sectors where those divisions fought by their geographic location on the battlefield, one can map where the German losses were suffered.

The summary of this mapping is as followed: by the Germans own measures (very likely taken from their extensive casualty reporting process), they suffered 458,830 total casualties. Of these, 237,998 (51.9%) were suffered across from the British portion of the front, and 220,532 (48.1%) before the French.

Here is a more detailed description of the process used.

An example entry from the list is given below:

I transcribed each the most important data points for each entry into an excel sheet, recording the sector, the start and end date for the time in the sector, and the losses suffered.

Once transcribed, I then organized the rotations alphabetically to allow me to group them by sector. This allowed for the calculation of sector totals.

The sector totals were then organized into their own excel sheet, where I finished the organization process by allocating them to the BEF or French sectors of the front, with a subcategory for whether they were north of the Ancre, between the rivers, or south of the Somme.

The geographic allocation of the sectors was fairly easy, as they are highly granular and normally only contained a single division’s worth of frontline. As an example of the allocation process for sectors near the intersection of the British and French lines, here is how the Maurepas and Guillemont sectors were allocated. On the left is a cropped section from the table, concerning divisional rotations for August, and on the right is a German map of the battlefield situation as of August 28th, 1916.

As you can see, the German dividing line between divisional sectors closely matches the dividing line between the British and French sectors of the front. The 111th Infantry Division, occupying the Guillemont sector, cleanly faces the BEF, and the 2nd Guard Infantry Division, occupying the Maurepas sector to its south, the French. As such, the sectors are allocated accordingly to the respective armies.

Yet, what of the sectors that were split between the armies? Overlap occurred twice when reviewing sectors, the first being Hardecourt-aux-bois, assaulted on July 1st, 1916, the second being the village of Combles. It is impossible to exactly allocate casualties here, so losses in both were simply split evenly between the BEF and the French. The reasoning for doing so will be explained using the example of Combles.

The map on the left is the region around Combles as of September 4th, as mapped by the Official History, the same region is given from the map for September 22nd.

There were three divisions inserted into the Combles sector:

As you can see, between August 28th and the 111th’s replacement on September 6th, the portion of the line that used to be the exclusively BEF Guillemont sector was now the Combles sector that straddled the intersection of the two armies. However, within nine days, the Combles sector was split into two divisional sectors which restored the clean separation between the armies, one held by the 213rd facing the French, the other by the 51st in front of the BEF.

As there are no official daily maps available of the front to track exactly when and to what degree overlap occurred, the decision was made to simply combine the Combles casualties and divide them in two. Given that the French inflicted more losses in a bit less time when the sector was split, this is likely either about right, or to the BEF’s favour.

So, what are the conclusions that can be drawn?

First and foremost, the French were not a secondary army at the Somme. Almost as many French soldiers and divisions served at the Somme as members of the BEF, they took more land, and they accounted for almost half of the casualties inflicted. Only in the losses they suffered were the French secondary to the BEF.

Second, the battle of the Somme raged south of the river as well, with 102,457 German losses, 22% of the total, occurring in that portion of the battle’s front.

In short, assessments of the BEF at the Somme, and the eternal question of whether or not Haig’s fight can be considered a success, must take the French performance into light. Only when the substantially greater efficiency of the French (who inflicted casualties at a rate in a likely range between 1.05 to 1.1 of their own losses) is accounted for can the BEF’s performance (by a similar metric in the range between .55 to .6) be assessed. Failure to do so means making the same error as too many other authors, believing that the story of half the battle tells the tale of its entirety.

Sasho Todorov is an attorney and historical hobbyist. He works for food and/or scanned primary source documents. He can be reached at twitter.com/SashoTodorov1