One of three brothers lost during the Great War, he was serving in Ireland when he accidentally drowned just outside Wicklow whilst bathing at Travilahawk Strand, between the military camp near the harbour entrance and the Black Castle.

According to the local newspaper,

'he went for a swim about 4.30 in the afternoon. He was not a strong swimmer, and after some time in the water he returned to shore. A comrade, who was nearby at the time, surmising that he was coming out, returned to the camp to dress, and meanwhile Lce-Cpl Wright apparently returned to the water. About 5 o’clock he was missed by Lce-Cpl Burtenshaw, who immediately proceeded in search of him. He was horrified to find the man’s clothing but no trace of his comrade.

A vigorous search was instituted, and a boat in the vicinity which is used by the officers of the regiment was procured. CSM Parks immediately undressed and plunged in, and with the assistance of Pte Henry knight, who dived and brought the body to the surface, and Sgt Truscott and Staff Sgt Punchard, quickly got the poor fellow to the shore. Artificial respiration was applied but it was realised that… the unfortunate man was beyond all human aid…

The fatality cast a gloom over the entire camp, as Lce-Cpl Wright was very popular amongst his comrades, and the greatest sympathy felt by the soldiers at the camp and the townspeople generally with the widow and child… the deceased had only been married some fourteen months. His home was at Lewes, Sussex.'

Lance-Corporal Wright’s body was brought back to Lewes and given a military funeral at Lewes Cemetery, where his gravestone is still maintained by the Commonwealth War Graves Commission.

Sidney Wright was not the only casualty suffered by the 1/6th (Cyclist Battalion) Royal Sussex Regiment whilst stationed in Ireland. Four other men drowned whilst travelling home on leave on 10th October 1918, on board RMS Leinster, when it was torpedoed and sunk by UB-123 an hour out of Dun Laoghaire, with the loss of over 500 lives, mainly military personnel.

Altogether some 261 British servicemen lost their lives during the Irish War of Independence, together with 410 officers of the Royal Irish Constabulary and 43 Ulster Constabulary men, as well as at least 500 IRA members and 750 civilians. The worst violence was in the first half of 1921 and it was during this period that 2nd Lieutenant Geoffrey Turner Hotblack and Gunner Bernard Francis were killed. 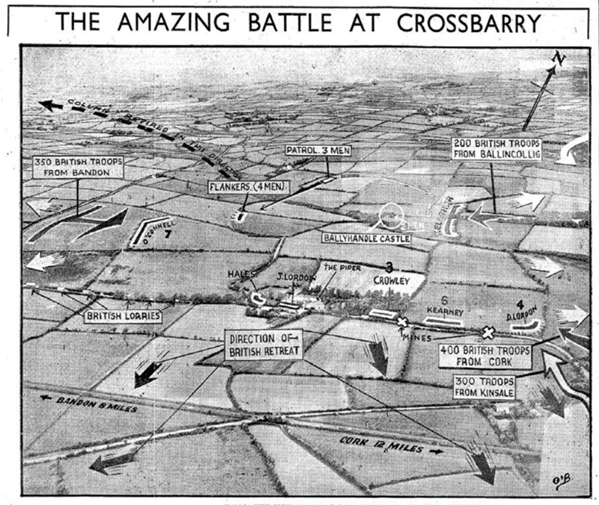 According to Irish sources the Crossbarry ambush on 19th March 1921, 12 miles south-west of Cork, came about as a result of over 1000 British troops attempting to encircle an IRA brigade, whose whereabouts they had discovered from a prisoner under interrogation. Soldiers of the 1st Essex Regiment, travelling in motor lorries from Cork, were seen to be well ahead of other British units converging from other directions, and therefore vulnerable to attack.

An ambush was quickly arranged at Crossbarry cross roads where, at about 7.30 am the three front lorries of the column were destroyed when the bridge over which they were passing was blown up by the IRA as an Irish piper played “Wrap the Green Flag Round Me”. 2nd Lieutenant Hotblack died as a result of a bullet wound to his spine during the fighting which ensued. 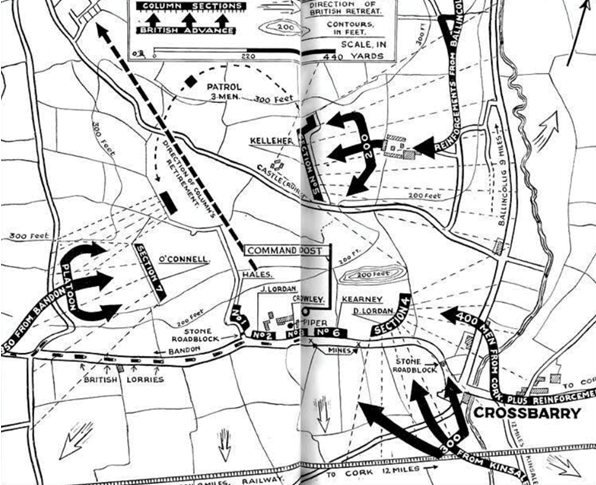 Born in Norwich in 1900 and educated at Brighton College he followed his three elder brothers into the army, entering Sandhurst just before his 18th birthday in September 1918. His parents lived at Rocklands, The Avenue, Lewes. They came to Lewes in 1912. His father was chairman of Kidd and Hotblack, Brewers of Brighton. According to one Irish witness, who had been arrested by him as an IRA suspect in December 1920, he spoke with a pronounced stutter. He had been in Ireland just over a year when he was killed.

Five other soldiers of the Essex Regiment died in the same ambush as well as three RASC drivers and one Royal Irish Constabulary driver. 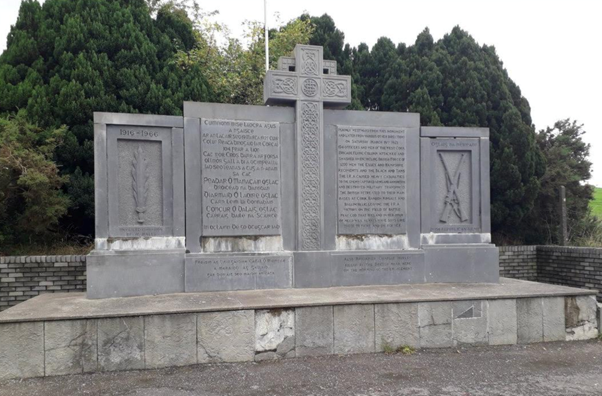 A monument to the 104 men of the IRA West Cork Brigade who carried out the attack stands on the site of the battle, which was one of the largest of the Irish War of Independence.

According to his commanding officer at the East Ferry Coastguard Station, 3 miles east of Queensferry (now Cobh), Cork, on Saturday 14th May 1921 Gunner Bernard Francis was abducted by armed men and shot whilst out walking 'with a chum… I searched the whole country round but was unable to find any trace of the murderers.'

Irish sources state that he and his fellow Royal Marine were taken by members of the Ballinacurra Company of the Midleton Battalion, Cork No. 1 Brigade, following orders to the IRA in Cork that 'all British military personnel in uniform should be shot at sight whether they were armed or unarmed'. Altogether seven British soldiers were killed that day.  Gunner Francis’s body, with that of his chum, were dumped in a local quarry.