An analysis of the Mercantile Marine index cards

Within the millions of documents the WFA have saved was a small metal set of four drawers that - in the scale of the archive - is minute, constituting less than 0.1% of the total archive. The cards in this set of drawers (see photo below) numbered less than 4,300 and were - as can be seen - labelled 'Mercantile Marines in the Great War'. These cards relate to pensions for injured (or ill) merchant seamen who were awarded pensions and also to next of kin of sailors who lost their lives. The proportion of the pensions for those who survived to those who died has been examined and it seems that from a random sample the ratio is about 40:60 of injuries to deaths. Bearing in mind the total Merchant Marine fatalities in the First World War number 15,635 (source: Commonwealth War Graves Commission ['CWGC'] web site) it is clear that this set of pension cards is less than entire. (Although of the 15,635 men commemorated by the CWGC it is of course the case that some of these men would not have been eligible for a pension, and a proportion would have sailed on ships that were not British). 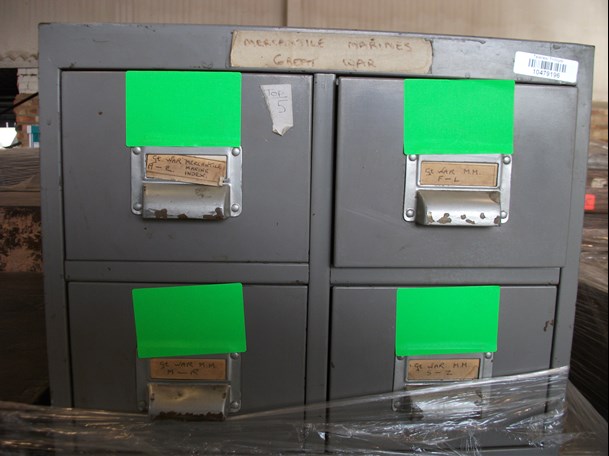 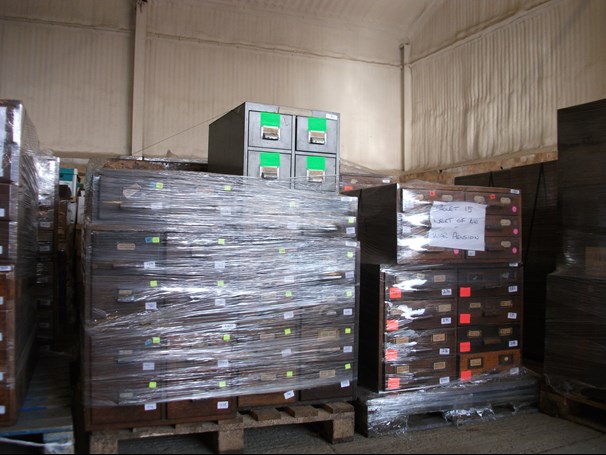 Above: the Merchant Marine set of drawers perched on top of just one of the 82 pallets of wooden units containing the various sets of records. The colour coding of the drawers (yellow on left, red on right and green for the merchant marine cards) is evident.

In the article below, Craig Suddick takes a forensic look at the contents of this set of drawers.

The original War Risks Compensation Scheme for pensions in respect of the Mercantile Marine seems to have began in May 1915 and was revised in April 1917 and November 1918. The scheme was then altered again in September 1919. These pensions were paid for death or injury to a seaman, officer or master of a British ship.

In 1929 pension claims were apparently being dealt with by the War Risks Insurance Department of the Board of Trade.

It would appear that most, if not all, of the numbers were originally allocated – for example, Newbury, is numbered 15,677 and was part of the second range of cards printed, 3000 in May 1921 (subsequent to the 15,000 in February 1921). Logically the second batch was needed as the first was fully used. 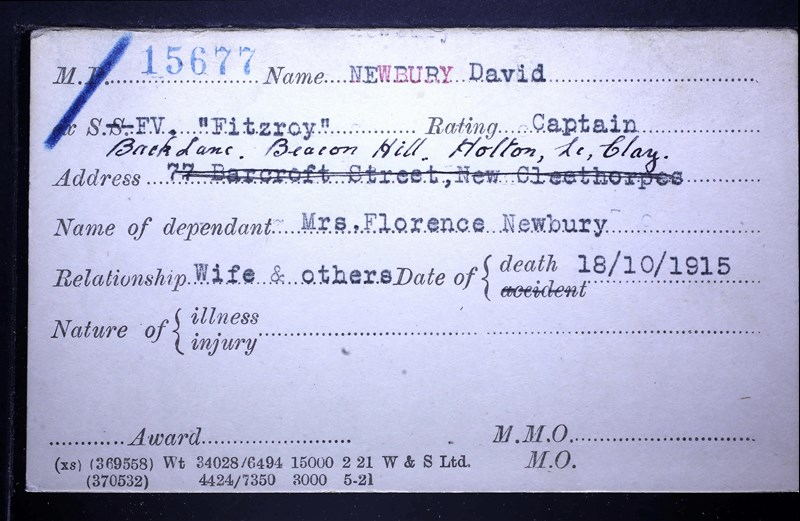 Above: the card in the 'Board of Trade' set for David Newbury. He seems not to be commemorated by the CWGC.

A further range of cards was printed in March 1922, taking the total cards up to 20,000, from 18,000. Again, it can be seen that the numbering fits well with the number of cards issued. 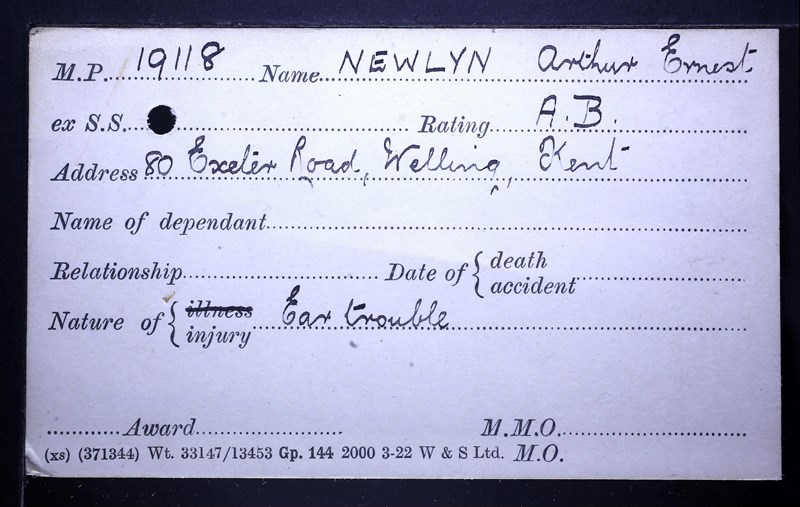 Above: The 'Board of Trade' card fpr Arthur Newlyn, whose pension was awarded due to 'ear trouble'.

The highest number known in the surviving range of cards is MP 19325 however this is apparently on an index card which was used in place of the original printed card.

When we examine the rest of the full surviving card index we do find that there are mercantile marine cases mixed amongst them. These cards are clearly within the ‘normal’ card types and not just cards mixed in from the Mercantile Marine index.

It would appear, so far as I can establish, that each of the cases which are in the standard range of index cards, or shown in the ledgers, does not have a card in the Mercantile Marine index.

I did wonder at first if the split was perhaps of those men who were CWGC qualified (i.e. typically died by enemy action) against those who died of illness etc but this does not hold true on further looking as there are men in the Mercantile Marine index who are also in the CWGC list. 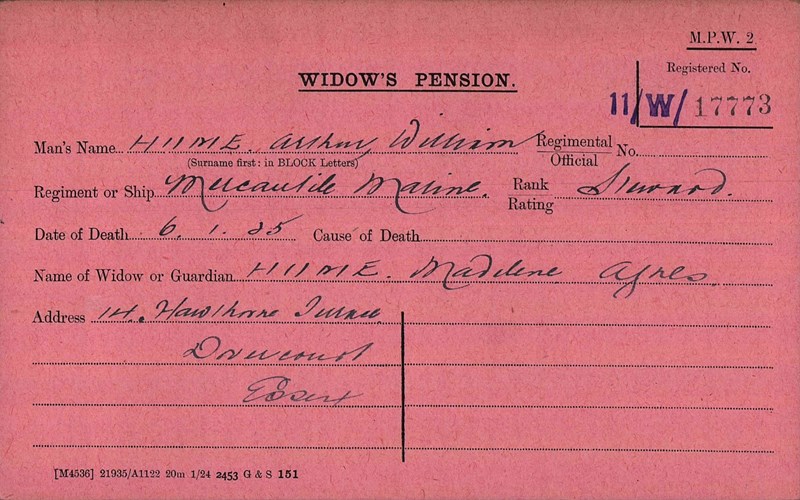 Above and below: Two cards within the Ministry of Pensions set labelled 'soldiers died' for two sailors. Arthur Hume whose date of death (1925) made him ineligible for commemoration by the CWGC, and Larence Mangion (?) whose death from 'apoplexy' was neither attributable to nor aggravated by war service. 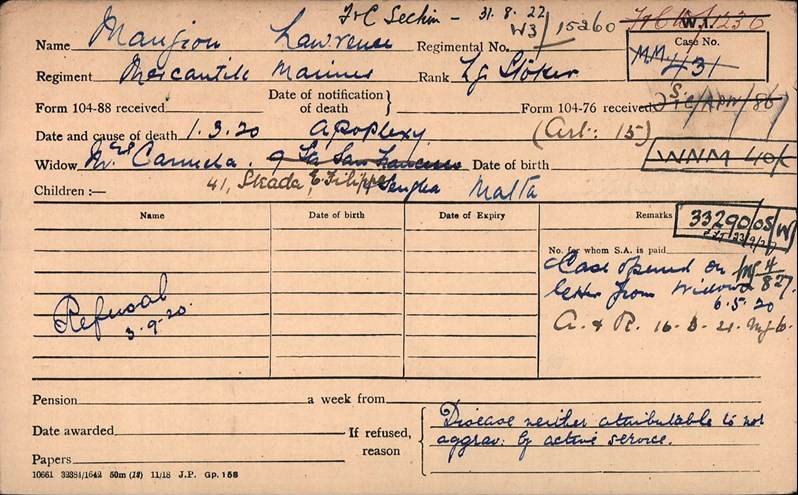 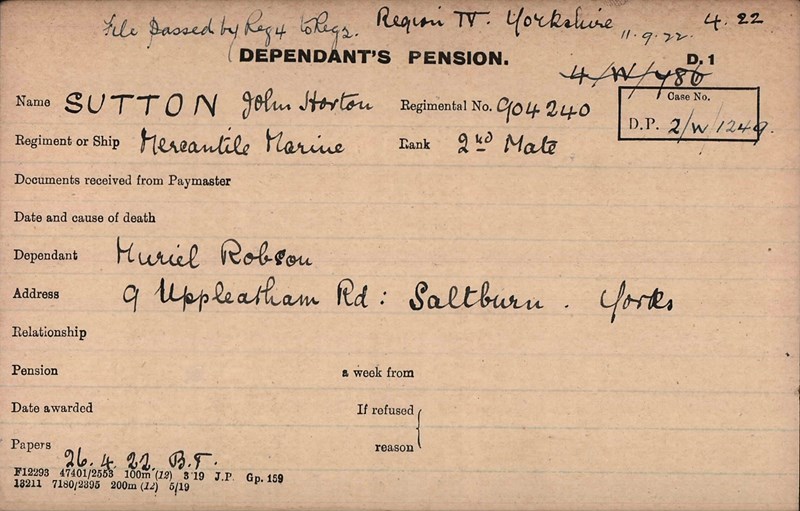 Above: Ministry of Pensions 'card' for John Sutton

Below: Two ledgers (referenced on the above card) for the same seaman. From one of these we can see his date of death was 21 February 1919. Unaccountably he again seems not to be commemorated by the CWGC. 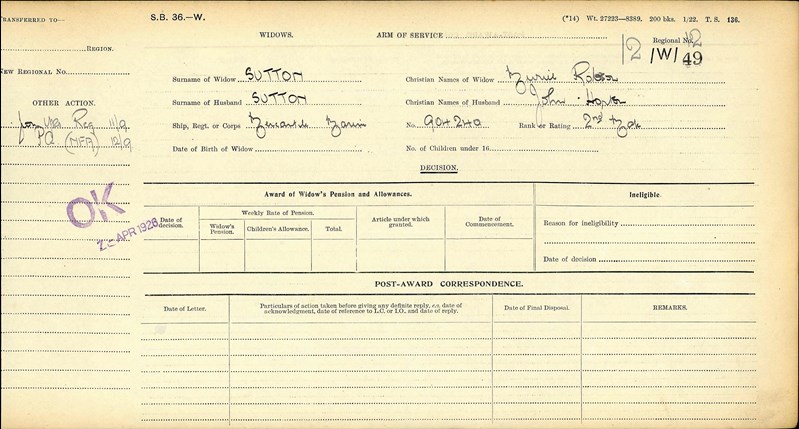 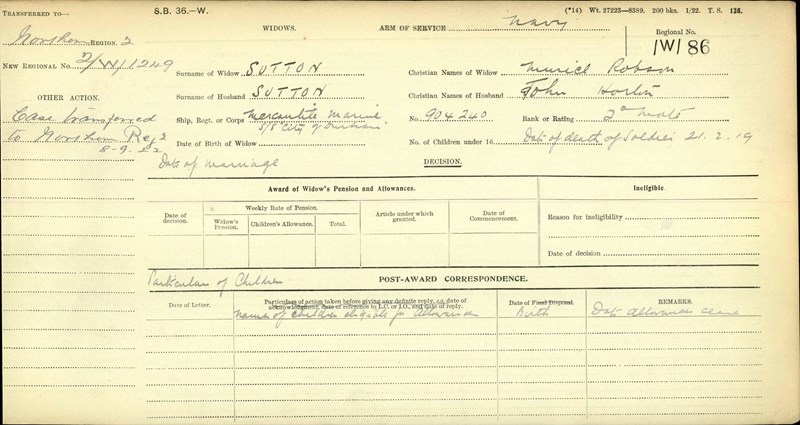 Allowing for the fact that the cards were apparently created for each man for whom a claim was lodged then we can see from the Board of Trade figures that there must be at least 4,390 claims (and perhaps some extra where there were orphaned children not included on a disabled or widowed claim).

Currently there are 4296 images in the Mercantile Marine Index Cards range (the ‘M.P.’ numbers on these cards range up to #19325). This number is close to the number of claims we know that existed with the Board of Trade in 1924 and so this set may represent the surviving records of that time that were retained.