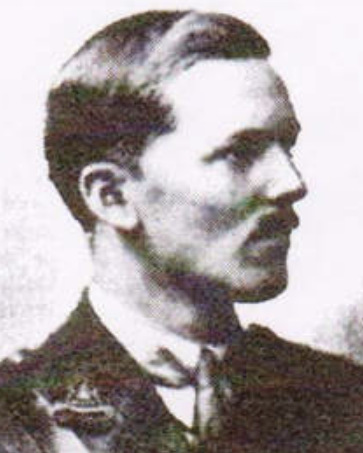 This article first appeared in the Australian Society of WWI Aero Historians and is published with the kind permission of the author.

The Manchester Regiment and 45 Squadron R.F.C.

“The most popular officer we ever had”

Many airmen who lost their lives during the Great War were men who had already proved their worth in other branches of their nation’s armed forces. One such airman was Captain Horace Coomber, whose operational flying career was, sadly, very brief.

Horace Bertram Coomber was born in Prestwich, Lancashire, on 15 April 1894, the only son of William Horace Coomber, the Assistant Civil Engineer to the Lancashire and Yorkshire Railway Company, and his wife Sarah Emily.

The very next day saw Horace join the University Officer Training Corps, after which he was gazetted as a Second Lieutenant in ‘C’ Company of the 1/8th (Territorial) Battalion of the Manchester Regiment on 3 September. The 1/8th Battalion became part of the 127th (Lancashire) Brigade, in the 42nd (East Lancashire) Division, but it  it appears that Horace transferred to the 3/8th Battalion after it was formed in March 1915 as a training unit to supply drafts to the 1/8th and 2/8th Battalions.

Horace evidently soon proved to be a good infantry training officer, as he was made his Battalion’s Scout Officer in April 1915, before his promotion to Lieutenant on 1 August that year.

In November 1915, he attended a course at the Bisley School of Musketry, at which he obtained a ‘Distinguished’ pass before being appointed as Battalion Musketry Officer. His next course was at the School of Trench Warfare at Maidstone in May 1916, where he was assessed as ‘Excellent’. Promotion to Captain followed on 1 June.

Although an apparently talented infantry officer, Horace volunteered to undergo pilot training and consequently transferred to the Royal Flying Corps in October 1916.

Like all would-be pilots, Horace first had to undergo a course in ground training at the School of Aeronautics at Oxford, prior to flying training at Hendon, Acton, Dartford, Tern Hill and Shawbury.

After graduation as a pilot, he went through an aerial fighting course at Turnberry in Scotland.

In September 1917 Captain Coomber was posted to France to join No.45 Squadron at Sainte Marie-Cappel aerodrome to fly the Sopwith Camel, the aeroplane that replaced the unit’s Sopwith 1½ Strutters in July. Although a Captain, he would carry out the duties of a Second Lieutenant with the squadron – a curious situation, but far from unique in the RFC. No.45 Squadron was then a component of Lt Col Alan Scott2 M.C.’s Eleventh (Army) Wing3 in the RFC’s II Brigade, commanded by Brig-Gen Tom Webb-Bowen.

No.45 Squadron’s Commanding Officer was Major Awdry Morris ‘Bunny’ Vaucour, who was credited with three victories over Fokker Eindekkers when flying Sopwith 1½ Strutters with No.70 Squadron in September 1916.

Vaucour's advice to pilots joining his squadron was “never break formation, should you ever find yourself alone in a fight, turn straight at the nearest enemy machine and fly for a collision . . . and never give way!”

In September 1917, No.45 Squadron was operating over the sectors of the front held by the British Second Army, under General Sir Herbert Plumer, and the Fifth Army, commanded by General Sir Hubert Gough. Both Armies were then engaged in the Third Battle of Ypres, often referred to as the Passchendaele offensive, after the ruined Belgian village where the Allied advance ended.

The Battle commenced on 31 July and finally ground to a halt on 6 November, when the muddy remains of what was left of Passchendaele village were captured by the 1st Canadian Division. The offensive, often fought in well-nigh impassable mud, due to the area’s network of drainage canals and ditches being obliterated by artillery fire, cost some 310,000 Allied casualties and probably a slightly smaller number of Germans, while the Allied line advanced only a few kilometres.

As a squadron in an Army Wing, No.45 Squadron was tasked with achieving aerial superiority over the sodden battlefield. The work was dangerous, often in marginal flying conditions, and at low level there was the constant hazard of artillery shells – pilots referred to ‘the tunnel’, meaning the zone between the areas where artillery shells from both sides were falling on the enemy infantry. There was an understandable steady attrition of Camel pilots. A contemporary of Horace in the squadron was the man who later became a successful author of books on air fighting during the Great War: Wing Commander Norman Macmillan OBE MC AFC.

As a new arrival, Horace had first to become acquainted with the realities of combat over the front, but he soon took his place as an operational Camel pilot. On 9 October, he was forced to land while flying Camel B3791 on patrol, but was unhurt. 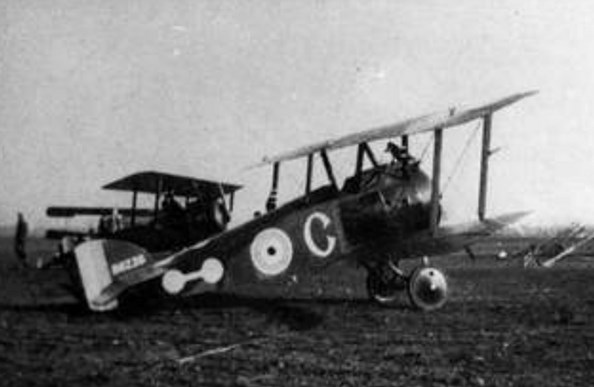 Sopwith Camel B6238 with its distinctive white dumbbell markings and prominent ‘C’.

This aircraft served with 45 Squadron in France and Italy from 4 September 1917 until returned to 7 AP in Italy on 24 February 1918.

Three days later, 05h25 on 12 October saw the beginning of the next stage of the ongoing British Offensive: the First Battle of Passchendaele.

As was usual during the Ypres offensive, the day was wet; it had rained all night, and showers would continue for most of the day. It was also cool, with the temperature reaching only 13˚C. In the words of the ‘The War in the Air, the Official History of the British Air Services’:

“The best that could be said of the conditions for a further infantry advance was that they were not yet impossible.”

Nevertheless, after reaching their starting positions by way of a precarious journey on slippery duckboard tracks, the already exhausted infantry had to flounder forward, while the RFC did what it could to assist their comrades on the ground. On that dismal morning, no fewer than 41 pilots, from 10 squadrons, added to the misery of the defending Germans by conducting low-level bombing attacks and machine-gunning infantry and artillery positions.

Seven Camels from No.45 Squadron left Sainte-Marie-Cappel at 1045 on a Northern Offensive Patrol, meaning that they were to fly through rain-drenched skies over the northern (Fifth Army) end of the British attack, where the Guards Division in XIV Corps was attempting to advance towards what was left of Houthulst Wood. About 30 minutes later, the Camels became involved in a fight with some twenty German fighters.

Captain Coomber in Camel B2375, aircraft ‘E’ of ‘A’ Flight, was last seen fighting enemy aircraft east of Houthulst, during which action he was shot down and killed.

The circumstances are a little difficult to determine but, according to German records, there are two possible claimants to the victory over B2375:

(9) Uffz Heinrich Stumpert, from Jasta 35b, was credited with a Camel north-west of Courtrai (now Kortrijk) at 1115 Allied time / 1215 German time.

His claim was for a ‘Sopwith 1 seater’; Uffz Justus Kaiser, (11) also from Jasta 35b, claimed a ‘Sopwith 1 seater’ south-west of Courtrai at 1120 /1220. Courtrai/Kortrijk is 28 kilometres from Houthulst, so the fight must have moved while it was taking place.

At about the same time, 2Lt Kenneth Willard12 in B2386 was also shot down and killed. Ltn Hans von Haebler (13) of Jasta 36 claimed a ‘Sopwith 1 seater’ North-West of Moorslede, which was probably B2386. Hence, there are three ‘confirmed’ victories after an action where two Camels were lost.

Determining just who shot down who in the fight is complicated by another fight that took place nearby at the same time, involving No.66 Squadron’s Sopwith Pups, in which four Pups were brought down by airmen from Jasta 36. To the Germans, both Camels and Pups were often simply ‘Sopwith 1 seaters’. In the absence of photographic evidence, we shall never know the precise details.

The RFC Communiqué for the day indicates that Lt J.C.B. Firth14 of No.45 Squadron, flying Camel B2350, sent down an Albatros D-type out of control east of Houthulst Forest at 1120, but the victory was evidently not confirmed.

After Horace’s death, Major Vaucour, (15) his squadron commander, wrote to the Coomber family “He proved himself a very capable and reliable pilot and very keen on his work; he was a great favourite with all, and always carried out his work in a manner which reflected great credit on himself and the squadron”. Another Major wrote, “He was a most efficient officer, and could always be relied upon to carry out any work of special importance”. An anonymous Sergeant wrote, “He was the most popular officer we ever had”.

No.45 Squadron remained on the Western Front until it moved to Italy in December 1917, where it remained until September 1918, when it was transferred to the Independent Force, RAF, to reequip with long-range Sopwith Snipes, intended to escort daylight bombing raids in 1919. The Armistice had come into effect before the Snipes were operational.

The Sky Their Battlefield Trevor Henshaw

(1) The 42nd Division fought in the Gallipoli campaign, then in Egypt, before transferring to the Western Front in March 1917.

(2) New Zealand-born Lt Col Alan Scott MC AFC flew Sopwith 1½ Strutters with No.43 Squadron in 1917, and then commanded No.60 Squadron, where he was credited with five victories while flying Nieuport Scouts. After being wounded in July 1917, he commanded the Central Flying School until the Armistice.

(5) Welshman Air Vice-Marshal Sir Tom Webb-Bowen was a pre-War officer and pilot. After the War, he commanded the RAF in India before retiring in 1933.

(6) Two Eindekkers were brought down on 2 September, and one on 13 September; all when flying Strutter A892 with Lt A.J. Bott as the observer.

(7) Macmillan’s book that deals with his time on the Western Front with No.45 Squadron is Into the Blue. He wrote about another twenty aviation-related books, including a history of the RFC, RNAS and RAF in Italy: Offensive Patrol.

(10) Royal Bavarian Jagdstaffel 35 was formed on 14 December 1916. By the War’s end, the unit was credited with 42 enemy aircraft destroyed for the loss of six pilots killed, nine wounded and two taken prisoner of war. Four pilots were killed and five injured in accidents.

(11) Uffz Justus Kaiser was born in Nürnberg on 19 July 1897. He served in Bavarian Jasta 35b from 21 September 1917, and the Camel on 12 October was his only victory; he was awarded the Bavarian MilitärVerdeinstkreuz 3 Klasse mit Schwerten on 21 October. On 18 February 1918, he was killed when shot down in flames at Esquerchin, near Douai while flying Albatros D.V 4448/17.

(14) By the Armistice, Captain John Charles Bradley Firth MC was credited with eleven victories, nine on the Western Front, and a further two in Italy. 15 After achieving four more victories on the Italian Front, Major A.M. Vaucour MC* DFC was killed on 25 June 1918 when flying Camel D1910; his aeroplane was shot down in error near Monastier di Treviso by an Italian Hanriot pilot from 78ͣ Squadriglia. He was posthumously awarded the Italian Silver Medal for Military Valour.