Anyone researching a person who served during the First World War will have some methods in common, and some of their own related to the context and purpose of their search. Over the last five years one of my responsibilities has been to research and refresh those we feature in the daily item ‘Remember On This Day’. This has been running for at least eight years and between my predecessors, other contributors and I, we have between two and five names researched for every day of the year. These are refreshed and replaced constantly.

The Pension Records in particular have been extraordinarily valuable in filling that significant gap between the April 1911 Census and a person's entry in the war. So often it is during this period where a young person, born typically in the 1890s, settles into an occupation, marries and starts a family.

However, to find the person’s backstory we are still likely to turn to the Census Returns for 1911 and 1901 in particular, but also of 1891. From these we are able to place an individual in their family, geographically in the country and socio-economically. Using a phrase used by my late grandfather, a First World War verteran and son of domestic servants, people ‘knew their station’. It is the Census return that shows us whether a person was working class or upper-class with all the nuances of lower and upper middle class in between based on a father’s occupation, household size and location, education and their own work history whether remaining at home or taking up lodgings close to work. 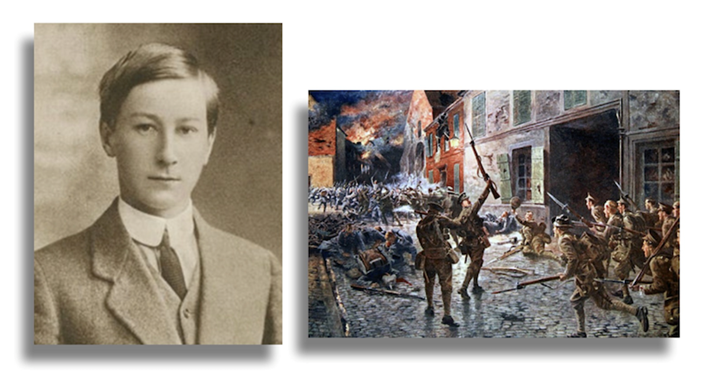 At the time of the 1891 Census the family of three, parents and 7 month old Robert, lived at White Hill Chase, Hants with four domestic servants; their cook, a parlour maid, house maid and nurse. At the time of the 1901 Census, a ten year old Robert Maude was attending St. Michael’s boarding prep: school at Westgate by Sea. Amongst the boys, ages 10 to 14, indicative of Britain at the height of empire, were born in the likes of Calcutta and Bombay, even Perth, Australia. Winchester College and Christ Church, Oxford followed. When Robert’s father died in 1908 Robert succeeded to the titles of 6th Viscount Hawarden and 8th Baronet Maude and 6th Baron de Montalt of Hawarden.  By the time of the 1911 Census, ‘Hawarden’ had a commission in the Coldstream Guards. 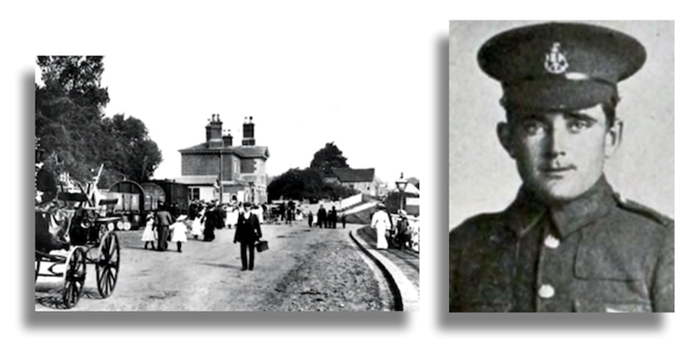 Arthur Kemp by contrast initially lived with his family on an estate cottage as his father worked up at the ‘big house’.  At the 1911 Census though, age 12, the family were living on the High Street, Wadhurst. Father Harry still worked on the estate, at home, there were the parents, three children, Arthur's grandmother and a lodger who also worked on the estate.

The size of a family and the amount of space they shared is very telling. It certainly highlights reasons for early enlistment where a young man was escaping exceedingly cramped conditions in the ‘rookeries, courts, cellars and backs’ of Britain’s industrial centres and cities. (Christian & Annal, 2014 p.31)

For example, Martin Brennan, 17 months old in 1881 was living with his Irish born father Martin, his mother Elizabeth ‘May’ and grandmother, two older children, an aunt and no fewer than five lodgers all in the same dwelling. The Census returns shows that all the adults worked in the woollen industry. Then years later Age 11 Martin was still with his parents at 21 Ashworth Street, Burnley along with seven siblings and a lodger. When he enlisted in August 1914 Martin was living at 105 Ardwick Street, Burnley with his own family of six. This we pick up from the Pension Records.

At the 1911 Census, Philip Blanshard age 16 was working as a ‘general labourer’ and living with his parents, seven siblings ages 5 to 21 and his 81 year old grandmother at 4 Finsbury Grove, Fountain Road, Hull

The Census Returns are rightly viewed as an essential primary source.

In most situations from 1911 the ‘head’ of the household completed the return. The returns are now readily available online as a digital database and can be searched in various ways: name, age, place of birth and residence. 2002 marked the move to digital access to the Census archive through the likes of Ancestry and a huge interest in researching family history has developed since with more and more records being made available.

During the Covid-19 lockdowns of 2020 and 2021 the interest in using these archives has surged and with initiatives such as those taken by The Western Front Association, now includes access to Pension Ledgers and Cards. Searches can also be cross-checked online with newspaper archives with the British Newspaper Archive likely to be a source for a photograph of a soldier who served and died. 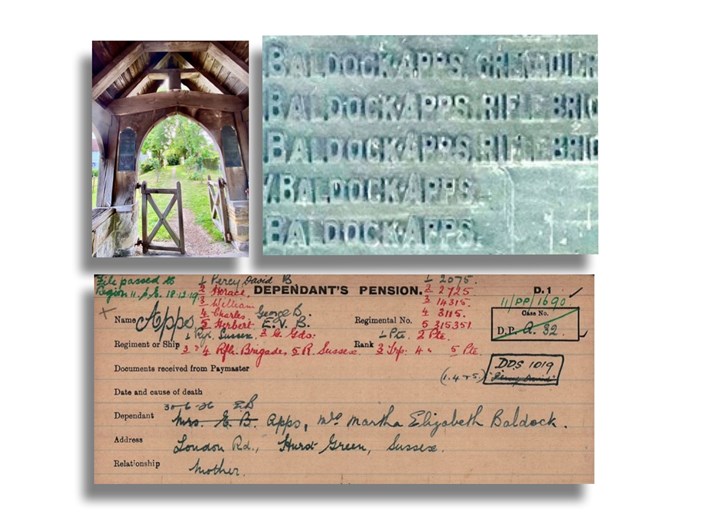 The Pension Card for the Baldock Apps family is particularly revealing as it shows that of her six sons, all of whom served during the First World War, five died.

The Census is a snapshot of society taken every decade since the 1840s with the 1911,1901 and 1891 returns of particular interest to those searching the era of the Great War. Find a person’s parentage, where they were born and raised, perhaps where they attended school and their occupation and if, and to whom they married and raised a family. In some cases you will find a person in hospital, on a ship, in prison or a workhouse. At times you disappear down the proverbial rabbit-hole in a quest to find a person eventually learning that they have lived with a cousin or neighbour from a you age - and in some instance even changed their name.

For example, age 4, Fred Cockett was living with his grandparents above his grandfather’s butcher’s shop - a business started in 1854 and is still in running today. By the time of the 1901 Census, Fred, now 14, was an apprentice tailor with John F. Wear, Tailor and boarding above the shop at 75 Main Street, Hawes - just around the corner from his grandfather's Butcher's shop. It is this detail, taken from the Census return and cross-checked with other records, such as Pension Ledgers and Cards and a visit to the town via Google Street view which brings a person to life - they are no significantly more than a name on a memorial.

Context is so important. The authors of Census suggest looking at the neighbours, the size of families and other social aspects, whether a servant works in the household is a lodger, the numbers of people per room in the dwelling, as well as local trades and industry, whether rural or urban. Of course the Census Returns should be triangulated with birth, marriage and death certificates, parish registers, wills, pension ledgers and cards, as well as archived newspapers and even Google maps and cemetery gravestones all help create a story.

Census tells this history of the census, its conception and leaders, the record and how it was taken and used with case studies and delightful insights to its peculiarities and peccadilloes.

The process of delivering forms to homes in the week leading up to the census which are then collected during the following week has continued from 1901 to the current day. Though with the difference now that for most of us having had the 2021 Census brought to our attention by a letter in the post, we will for the first time be completing the Census online.

In 1911 it was our ancestors' actual handwriting that we see on the records. This throws up some interesting results because at the time of the Suffragettes Movement some women expressed their frustration at not having the vote by scratching out their names on the Census return. (Christian & Annal, 2014 p.53)

2nd Lieut. Richard Patrick Hemphill who we remember on 24 March was born in Ireland. One of five, at the time of the 1901 Census the household included his mother, siblings, two visitors (a cleric in Holy Orders and his son), as well as a nurse, housemaid a domestic cook. Of note is that the children age 4 and 3 could not read, nor could Nora Doughert the cook. (National Archives of Ireland)

Importantly for those of us with an interest in the First World War, the 1911 Census for the first time provides complete enumeration of the British Army serving overseas, including India, South Africa, the West Indies and Ireland.